The Michelin Star Empire: How a tyre company sets the standard for culinary excellence?

Michelin is the largest tyre company in the world. But, its more famous for giving stars to restaurants. Now the question is, does the Michelin guide business actually sell more tyres? Well, let's find out!

The Michelin company is an ICONIC brand!

Founded in 1889, the french tyre company is now the largest in the world, closely beating its rival, Japan's Bridgestone. It made a total sales of ~€23.8 billion in 2021, which generated a net income of €1.8 billion![1]

Strangely, even though Michelin tyres are used in Formula 1 race cars, luxury cars and even space shuttles now, when we hear the Michelin name, we never immediately think of tyres or the famous Michelin man. But, instead, we think of food!

The Michelin star business is a mammoth on its own. Michelin restaurant chefs are equivalent to culinary geniuses, so much so that the notoriously tough Gordon Ramsay was in tears when he lost his 2 stars in 2013![2]

But, why did a tyre company enter the food business? Today, I'll be exploring the history of Michelin Stars and their influence on Michelin's tyre business!

The story of the Michelin brothers

The Michelin tyre company came to be almost by accident. When the brothers, Edouard and Andre, took over their father's business, they were making rubber-based farm equipment. 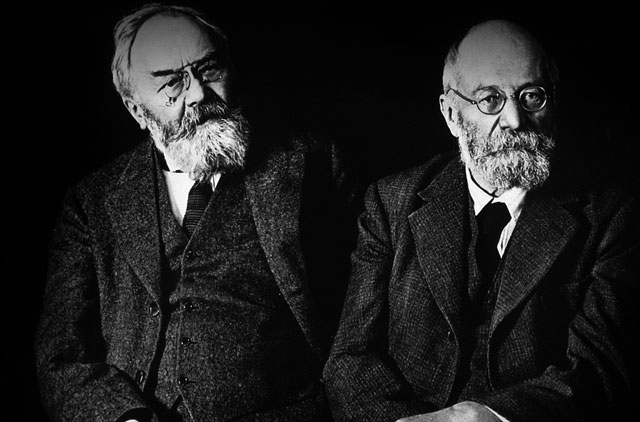 One fine day, a cyclist came to the brothers to repair his broken tyre. Back then, repairing a tyre was a tedious task. This prompted the brothers to create their own version of the tyre.

They invented a removable pneumatic tyre in 1891, and the Michelin men were officially in the tyre business!

Creating a new market with the Red Guide

Back in 1900, countryside folks in France were not so keen on owning a car or using it so much that they require an occasional tyre change. France had only over 3000 cars on their roads, which obviously won't result in a thriving business for Michelin[3].

So, Michelin not only had to

That's when they came up with a genius idea! In the 1900s France, travel guidebooks were all the rage. So, they decided to create their own guidebook. The first Michelin Red Guide was published in 1900, and immediately it sold 35,000 copies[3]! 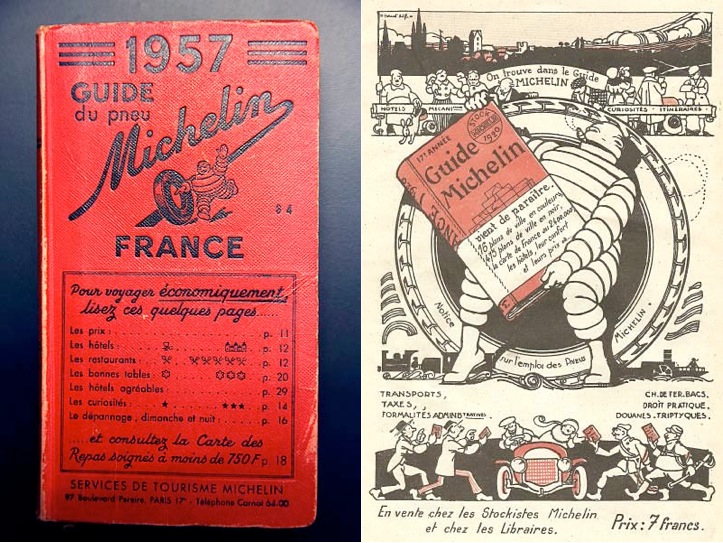 The guide included maps, tyre repair shops, maintenance guidelines, mechanics, etc. encouraging people to travel more, preferably by a private vehicle. The copies were purchased in huge numbers by youngsters who were aspiring to own a car one day!

Listing restaurants in the Michelin guide

The idea was to associate the Michelin guide with the best and the most luxurious classes in the country. Why? Well, you see, only the most wealthy could afford to own their private vehicle back then.

These folks obviously loved eating at fancy new places. So, they would want to own a guide that specifically lists such thoroughly reviewed places. As for the restaurants, getting featured in the Michelin guide became a status symbol.

In 1936, Michelin created the 3-star system to actually assign status. And, the wealthy french car owners were all in.

The strategy worked out perfectly!

More restaurants in the guidebook = More travelling = More tyre sales, which is exactly what Michelin wanted.

The Machine behind the Michelin Stars Business

Now, over a century, the Michelin Guide has become a complete BEAST of an operation. It features CIA-level secrecy and a trove of inspectors that visit restaurants throughout the year to test and feature them in their guide.

The inspectors then assign restaurants with stars. 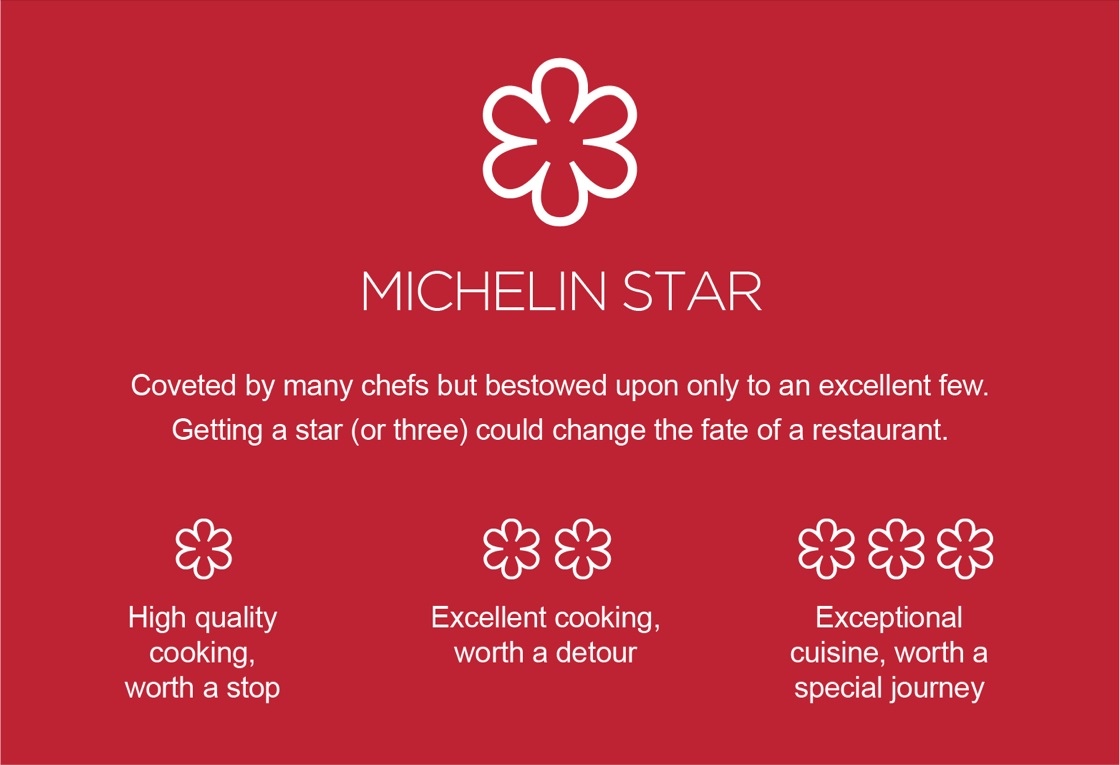 Michelin Guide is only present in select cities of very select countries. When the Guide enters a country, it's considered a big affair.

Today, the guide covers ~20,000 restaurants in its published piece, out of which only ~10% receive a star.

But, is giving out stars good for business?

Well, yes and no! The Michelin Guide mostly makes money via selling its guide copies and occasionally receives non-recurring amounts from states to create its own guide.

All in all, the business of stars is an unprofitable affair. But, It's a marketing expense with a huge impact that Michelin can easily justify.

In 2005 and 2007, the Michelin guide finally left the shores of Europe to come to America and Japan, respectively. Today, Tokyo is dubbed as Michelin's favourite city. It is also the home city of its biggest competitor Bridgestone.

Japan's thriving automobile sector alone accounted for 7% of the global share. So, winning in Tokyo was all too important.

But, was the Japan launch good for business? Well, let's do some math to figure it out.

Considering the cultural cache and influence the Michelin guides have, just spending 1.8% of the total marketing on running these guides seems entirely justified.

Additionally, an internal study[7] suggests that the presence of the Michelin Guide in a country means people are up to 3% more likely to buy Michelin tyres.

So, even though, the Michelin Guide lost $15M, its tyre sales in Japan increased by $36.4M!

Chefs' love and hate for Michelin!

There's no denying that Michelin Stars are important to the Michelin company as a whole. But, it has much much more value in the restaurant community.

Chefs begin their careers aspiring, dreaming of one day receiving their first Michelin star. And although, one may argue that Michelin Stars are losing its parent companies' money, but when a restaurant receives a Michelin star, it's always good for their business!

According to the late Michelin star chef, Joel Robuchon[9],

Prior to a Michelin star,

Now, with Michelin stars, the footfall increases. And, with the added reputation, the cafe is free to increase its meal cost.

But, according to most, receiving a Michelin Star is a double edge sword! With more recognition comes more pressure. Michelin-star restaurants have to consistently deliver. And, with more incoming eaters, maintaining quality becomes difficult.

If these standards are not constantly met, restaurants can lose their Michelin stars which is incredibly harmful to their business.

It's strange how a tyre company holds the fate of food-industry players in its palm. Especially in the era where very few people take long car drives to visit a restaurant. Today, most people will have to hop on a plane to visit a Michelin-star restaurant in Kyoto or Paris.

So, why still continue with this? Well, even if, today, these guides are not our travel companions, they are still excellent branding tools. With Michelin Stars, Michelin creates its luxury brand image and given its excellent sales numbers, the image is thriving.

As for the chefs, receiving a Michelin star is a very worthy goal, even if many journalists will call the whole affair and Michelin-worthy food pretentious. But, given the cultural significance of these stars all over the world, this affair won't be ending any time soon.

So, what do you think? Is the whole Michelin star business pretentious or elegant according to you? Leave a comment with your thoughts! Buildd an SEO blog in just 2 years that makes $120K revenue per year from your home!

FTX crash timeline:November 2nd, 2022 — Until November, everything was going super well, when CoinDesk, a crypto news site published a document containing the balance sheet of Almeda Research & how it had a large number of crypto tokens called FTT belonging to FTX. So, Almeda relied entirely on a token that was created by its sister exchange and was not backed by other liquid dollars or assets.

November 6th, 2022 — Learning this, Binance CEO, Changpeng Zhao, announced that the company would be offloading all its FTT reserves. November 8th, 2022 — As a result of the massive offload, FTT's price collapsed below $22, hitting both FTX and Almeda Research.

This run caused panic among FTX customers with traders on the platform scrambling to withdraw their actual dollars and assets from the exchange. This resulted in the withdrawal of $6B dollars of assets from FTX. Now, the exchange did not have the liquid funds to pay their customers. So, they had to be bailed out. SBF went to Binance for help. And, Binance's CZ announced that he would gladly help out.

November 9th, 2022 — After evaluating FTX's balance sheets, Binance backed out of the deal citing the mishandling of funds of FTX and Almeda with a glaring $8B-$10B hole in the balance sheet! November 10th, 2022 — FTX officially announced that they are shutting down operations and filing for bankruptcy.