At Jeff Bezos's Amazon, it's always DAY 1. This has helped them grow to a trillion dollar company with less than 10% profits. Here's how!

You can accuse Bezos of many things, but complacency is surely not one of them.

The man literally built a trillion-dollar retail behemoth & launched himself to space in a single lifetime. And, he did it in the most unorthodox way.

Now, Bezos's Amazon is not just a retail business. It has a nice All-Star business lineup — AWS, Prime Video, Advertising business, Amazon Music and all the other 100s of startups it has acquired (looking at you, Twitch! 😉)

So, basically, if Amazon eyes a market, it has to have it.

Now historically, the single-digit or sometimes negative profit margin has concerned a lot of seasonal investors, citing Amazon as unsustainable.

But, Bezos didn't care! Because he had a better metric that drove Amazon to world dominance and its trillion-dollar status. Let's learn why Amazon is obsessed with cash flow!

First, a bit of history: Jeff Bezos' "Everything Store"

Let's travel back to 1991. Bezos was working at another brainy job at a quant Hedge Fund called DE Shaw. He was the head of investments in the internet space.

So, Bezos essentially got a first-row seat to all the incredible innovation happening on the World Wide Web. But, he could no longer sit on the sidelines.

He jumped into action with a dream of building the "Everything Store" - a bazaar or market that sold everything on the internet. But, first, he had to start somewhere.

So, in 1994, he launched Amazon in his garage & started selling books. Fast forward to 27 years, this online books-selling business has transformed into a global e-commerce giant.

Now, from the beginning, Amazon was never just a simple e-commerce store. But more like a large-scale experiment on - how many markets a company could possibly dominate?

And, the results are promising!

Take the example of AWS. The largest cloud computing platform on earth was built during a crisis as a simple side-business. But, today, it's Amazon's most profitable business.

Similarly, Amazon's advertising business was built on top of its large marketplace and subscription platform. But, it has turned out to be a lucrative business that produces better margins than its retail counterpart.

But, while there were successes, there were also failures. Think the Amazon Web Store (Shopify-like product), the Fire Phone or even WebPay.

Now, regardless of success or failure, this rapid experimentation has to be a costly affair. After all, directly competing with Netflix & Spotify on their home ground needs cash.

But, Amazon is very much notorious for its low money-making prowess. 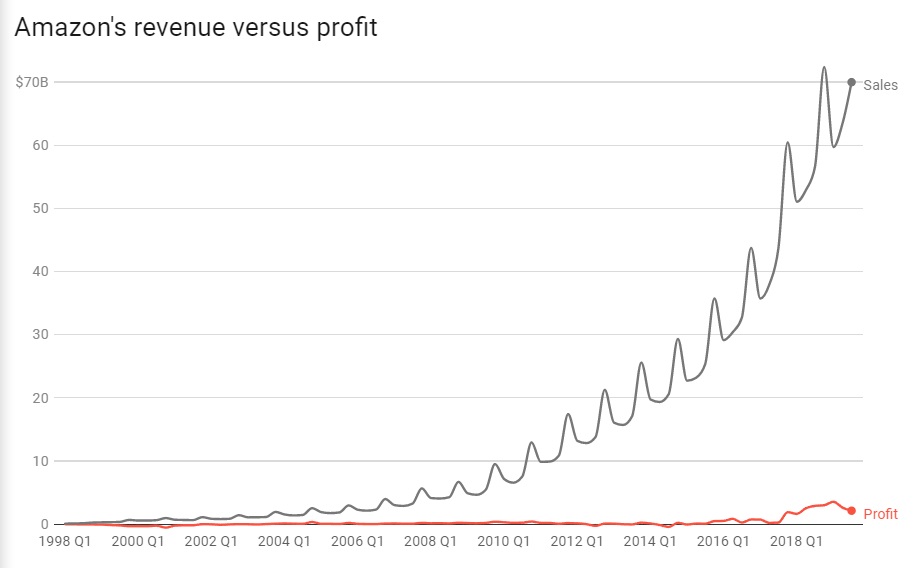 But, fortunately, low profits don't always imply a failing business. And, in the case of Amazon, it's more of a blessing than a problem.

You see there is a more telling metric that helps you understand how a company is actually doing. It's called free cash flow.

And, it's a metric Jeff Bezos swears by. He in fact once said that "Our ultimate financial measure is free cashflow"

Now, of course, in the below image, Amazon's quarterly free cash flow curve looks much more promising than its profits. In fact, in 2020, Amazon's annual free cash flow was 4 times that of Twitter's & Snapchat's revenue combined. 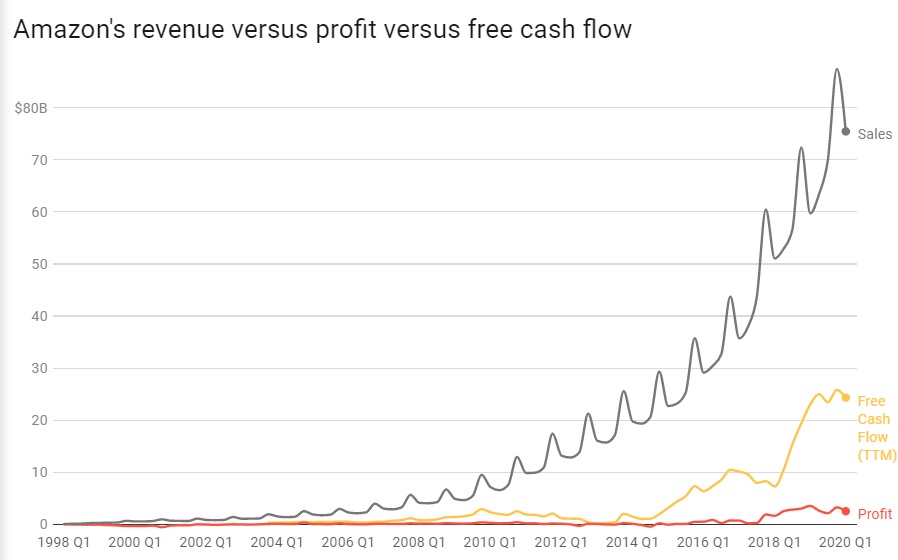 But, what exactly does free cash flow mean? Well, let me explain more!

Profit is the cut Amazon gets to keep after paying all the expenses. So, if Amazon makes x amount of sales, but collectively it pays y amount on fulfilment, marketing, operations etc. Then the profit ⇒ x - y

Now, free cash flow is very similar to profits. But, it also takes into account the time when the money changes hands. That is when the sale is made and the expenses are paid.

With Amazon, it receives money a few weeks before they have to pay the supplier. So, till they pay that money back the cash flow will be positive.

Confused? Well, let me take a hypothetical example to explain this!

Now, of course, not all businesses enjoy the benefit of paying a month later after the purchase is made. But, Amazon is lucky there.

And if you consider that Amazon actually sells close to 1.6 million packages a day, that's a lot of periodic inflow of money.

So, how does Amazon benefit from this?

Now, here Bezos's strategy comes in. Amazon takes this large sum and invests it back into Amazon and its many projects. So, essentially, this money is like oil that keeps the Amazon machine running.

On top of this, investors determine the health of a stock based on its free cash flow numbers. So, Amazon benefits from that as well.

On top of everything, Amazon could naturally reduce its expenses and investments to improve its profit margins. Maybe not grow and expand at the super fast current pace.

But, another top benefit of going with this strategy is that it keeps your profits low. Low net income means that your taxable amount is also low.

Amazon is obsessed with scale, rapid expansion and relentless experimentation. This is an outcome of their "it's always Day 1" attitude.

In the 2017 Shareholders letter, Jeff Bezos explained this idea.

And so to make sure that it's always Day 1, Bezos outlines a few principles!

If you haven't figured it out just yet, Bezos is essentially describing how a startup is run!

But, ultimately it's very clear that this is the blueprint that allows Amazon to take thuggish & borderline pathological decisions. Decisions that prompt every one of their crazy experiments that helped them buildd AWS or Prime! These numbers are totally unreal for an e-commerce company! Look at Flipkart and Amazon, they lose INR ~1200 Cr every quarter. So, why is IRCTC doing so well?

Well, there is a simple answer - IRCTC is a government-controlled monopoly! How? Well, for once it is the only company that is authorized to: - Sell railway tickets online - Provide catering on trains - Distribute packaged drinking after at stations.

So, IRCTC has 0 outside competition! So, is IRCTC making a ton of money year over year? Well, yes and no! IRCTC charges online aggregators like Paytm, MakeMyTrip, etc an INR 12 per ticket. In fact, Paytm, a company that sells 14% of total train tickets, IRCTC gains ~INR 70 Cr from Paytm alone!

The government filed for IRCTC's IPO in 2019 and sold 12.5% of its stake! So, when in 2021, the government suddenly announced that it will take 50% of convenience fees revenue from IRCTC, the share price crashed by over 20%.

With the government holding 67.5% of stake in IRCTC at the time, they ended up losing ~INR 14,000 crores in the process! Seems like the monology situation has 2 sides, and IRCTC while benefiting from it, also faces quite a few problems.

Existing investors are selling shares to the tune of ~10,000 crores

While it has shown strong top-line growth, it is in a highly competitive space which also faces uncertainties from regulators.