What happens when you combine the modern e-commerce marketplace model & a social media app? You get Meesho! Created by 2 IITD grads, Meesho blew up in a very short period of time. What how exactly does it make money? Well, learn all about Meesho's business mode in this article!

Online shopping & social media are the 2 things that have changed our lives drastically in the recent years. Now if someone were to combine both of them, you'd naturally think such a platform would blow up.

Well, one such company started with this ambitious goal 6 years back, and is a Unicorn startup in India, worth $5 billion! Of course, we're talking about Meesho.

Not just the value, but the revenues have also grown exponentially over the years. In 2021, they made ~$100 million in revenue, more than doubling what they did in 2020!

But the more interesting part is Meesho's business model. On the face of it, it looks just like an e-commerce marketplace, but if you dive deeper, there's a lot more to uncover.

Right then, let's get to it. We'll dissect Meesho's business model, how it makes money (or not!) and what the future looks like in a 2-part series. Let's go!

The premise was simple — connect local fashion stores with customers on the internet. And the model was very similar to Myntra — users could buy, try and return clothes as they wished.

Although there was one key difference here. With Myntra, you're assured that the items you buy are branded. So getting users to buy clothes from the likes of Levi's and Puma is fairly easy.

But who would want to buy clothes sitting in Bangalore from a random X’s clothes shop located in Delhi? There was a clear lack of "trust".

Fashnear was doomed from the start.

Vidit & Sanjeev also struggled to keep up with the delivery expectations of the few orders they got, and this added to their troubles.

So how did Meesho happen?

Let's take the same example above, and say Mr. X was a local retailer in your region. Now if a friend of yours recommended this particular store to you, you'd possibly purchase stuff from this store without much hesitation. Your friend here adds the "trust" factor, that was missing in Fashnear.

Vidit & Sanjeev realised that they could mimic this model using social media.

At around the same time as Fashnear started, social media was already used extensively for marketing. Local retailers shared pictures of their products all the time to get customers interested.

So Vidit & Sanjeev used both of these things in the 'reseller' model where they included a third party, the 'reseller.' And thus, Meesho was born — short for Meri E-shop.

Let me explain the 'reseller' model with an example:

The reseller model now ensures that customers are targeted through people they "trust". These resellers also earn income from the transaction. Win-win!

Okay, but what is Meesho's business model?

Now that we know what Meesho does, let's take a look at Meesho's business model. Meesho makes money at multiple steps in the process.

The original product sellers pay a commission of 10-20% to Meesho. This varies from seller to seller and also depends on the price of the product.

Sellers tell the dates of dispatch to the resellers over the app. If they fail to ship the order in time, Meesho penalizes them and earns money at this stage.

Many delivery partners fulfill Meesho's order depending on the location. Meesho earns a small share of the delivery charges, with the rest going to these partners.

If you recollect our post on how everything is becoming an ad network, you'd already know that any platform that has lots of data is a potential ads platform.

On Meesho as well, sellers advertise their products to get top positions. They pay Meesho for ad slots.

Wait, but is Meesho actually making or losing money?

Let's look at the actual numbers.

Clearly, these numbers show that Meesho is scaling real fast. It seems like there's no stopping Meesho to become the Amazon or Flipkart of social commerce.

But hold on, the revenue numbers surely won't paint the whole story.

Now here's where things get real.

But where's all the money going?

Well, there are 2 major expense heads for Meesho:

So all of the revenue Meesho makes from the sources we saw above is clearly not enough to offset the huge expenses it's incurring right now.

Now, the pile of expenses is only one of Meesho's many problems.

Both the parties Meesho serves i.e. end consumers & resellers have a lot to complain.

If you take a quick glance at Meesho's reviews online, you'll see a flood of negative reviews around its poor customer service & product quality. 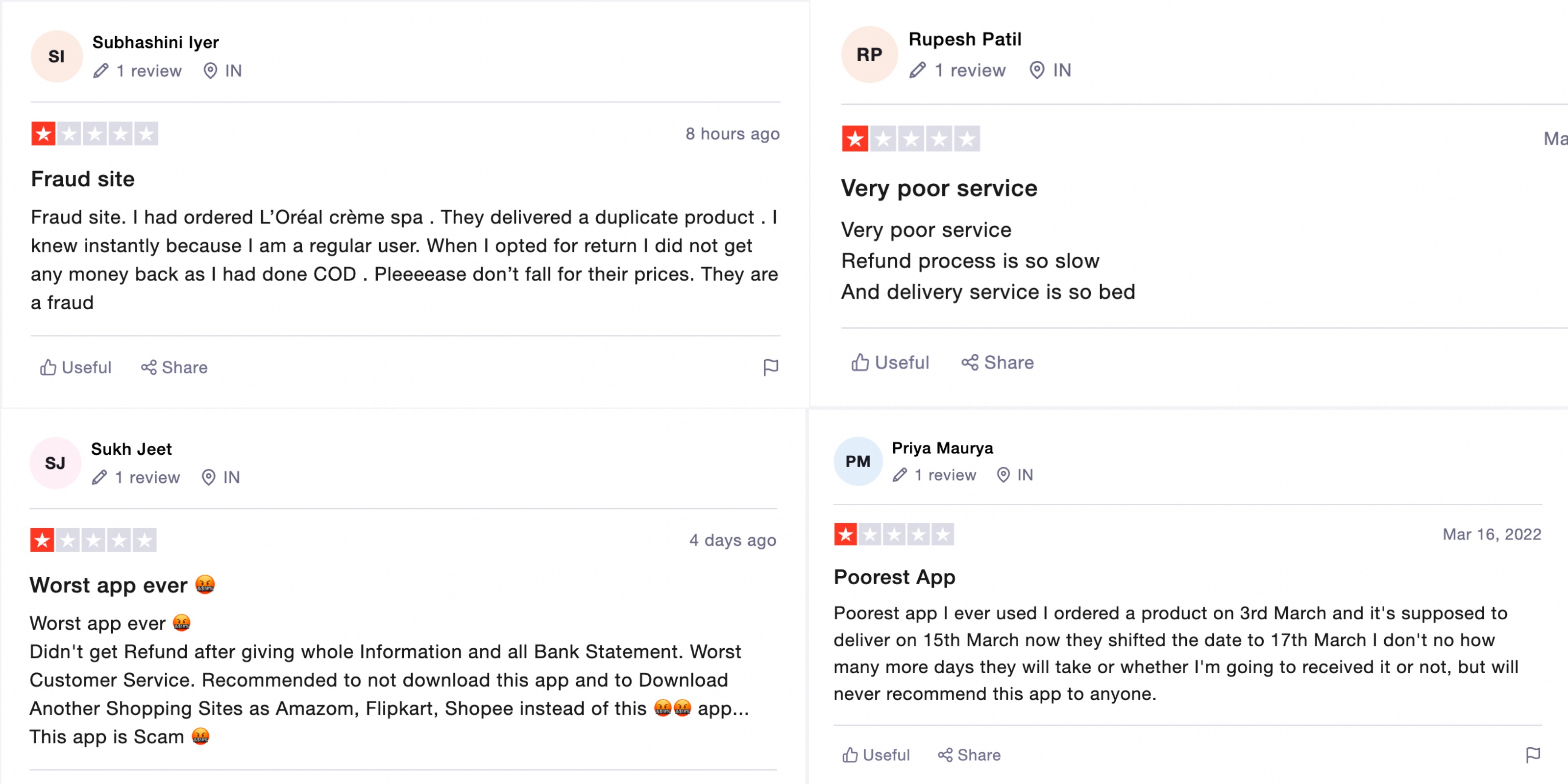 Granted that large marketplaces like Amazon & Flipkart would also see many negative reviews for some of their products. But poor reviews on such large scale is clearly concerning. 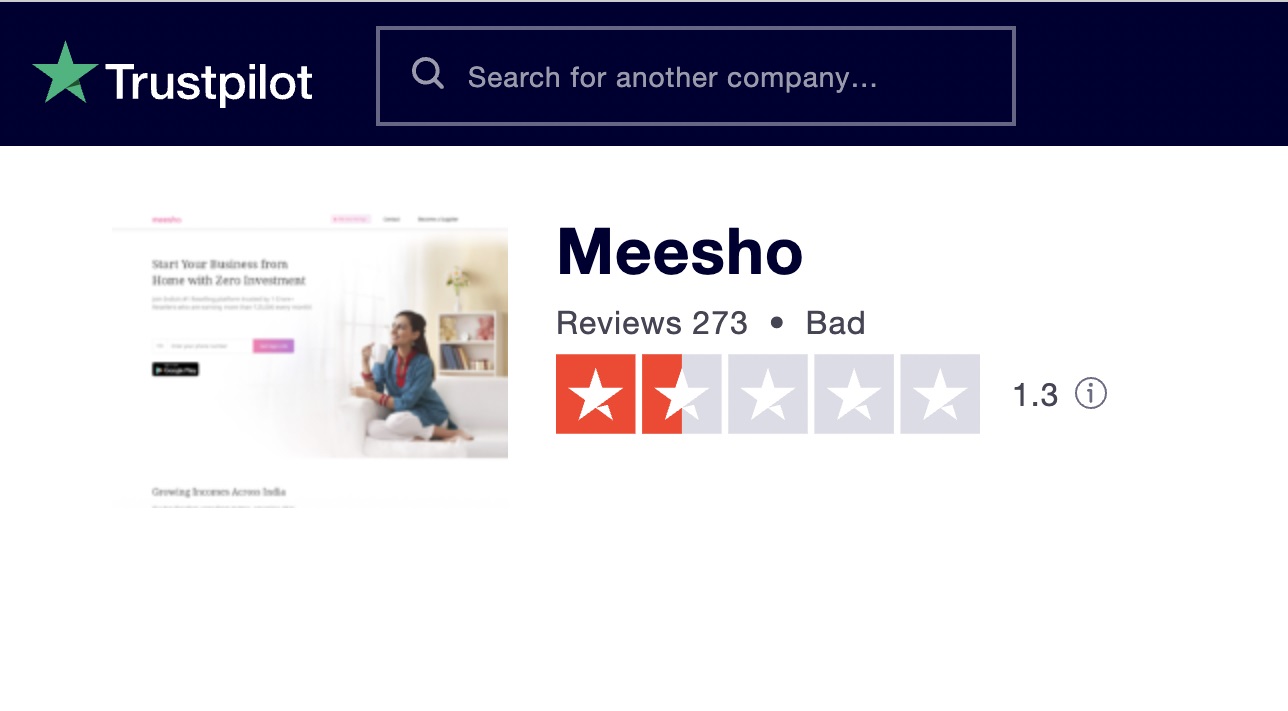 2) Resellers — Lack of control over quality or delivery

Now, the biggest problem with the way Meesho works is that resellers are the "trust" factor for customers. But they control neither the quality of product nor the delivery.

Knowing this, you'd possibly say that Meesho's reseller model is clearly doomed. But then, how come the revenue is growing so fast.

Well, here's what's even more surprising — 75% of Meesho's revenue comes from customers who order directly, and only 25% comes from resellers.

Technically, Meesho is functioning like a B2C e-commerce marketplace similar to an Amazon or Flipkart. And the reseller model that Meesho started with is bringing in just a fraction of the business.

But what does this mean for Meesho? Will they start competing with Amazon & Flipkart now? Isn't there a bloodbath in the e-commerce space, how would Meesho even survive?

Hold on, hold on. We'll get to all of this in the 2nd part of the article 😎