Spotify is a vastly successful startup that generated $11B in revenue in 2021 & is worth $32B. But how did this small Swedish company achieve such a massive feat?

Back in the early 2000s, you had 3 options to access music: 1) Buying physical copies of vinyl or CDs 2) Buying digital songs or albums 3) Illegally downloading music online Over half a billion people were listening to music online & the majority of it was through illegal means. And because of this the music industry had already lost $12.5B by 2012.

David Ek realised that music streaming can be a possible solution to piracy. Therefore, He launched his small startup called Spotify in Sweden. The idea was to create an extensive catalog of music that is accessible to people for free. So, they spent their early days legally licensing music in Europe. Only after establishing themselves in Europe, did they move to the US & then the rest of the world.

Since Spotify's very humble beginnings, the company has grown to a valuation of $32B. In 2021, Spotify made $11B US dollars. So, how does Spotify make money? Well, they have two major revenue streams. The premium subscription service accounts for 85% of their revenue & advertisements that made $448M in fourth quarter of 2021.

Spotify also saved the day for the music industry. Today, music streaming accounts for 85% of music industry revenue! And, the space as a whole is going to grow to $37B by 2030. 🤯

The tech giants could smell the cash flowing from the music streaming space, so the trinity Amazon, Apple, Google all joined the game. So, how does Spotify stack up against these giants? Well, let's look at the premium subscriber's split 1) Spotify — 32% (180M premium subs!) 2) Apple Music — 16% 3) Amazon Music — 13% 4) YouTube Music — 8%

Now, Ek has high ambitions of transforming Spotify from a music-centric platform to an audio-first platform via podcasts! Spotify plans to improve its profits margin by monetizing podcasts with advertising revenue.

But weirdly, Spotify's venture into the podcasting world is the very reason why it's facing so much backlash today. I'll be covering in more detail Spotify's payout structure and why it's at the center of all controversies. So stay tuned 😁

Over the centuries, a lot has changed. But our LOVE for music has remained the same.

Now, Spotify has been through a roller-coaster journey to reach the stage it is at today.

Once seen as the saviour of the music industry, Spotify has now somehow become a supervillain in many people's eyes.

Tim Cook, Apple's CEO, went as far as to say that Spotify is "draining the humanity out of music." Ouch!

But, no matter your take on Spotify, you must agree, this small Swedish startup has really changed the game. So, here's the story of how Spotify changed the music industry. Read on!

Back in the early 2000s people had 3 options to access music:

The third option was becoming increasingly popular. Over half a billion people were listening to music online & the majority of it was through illegal means.

Eventually, sites like Napster were fined heavily for copyright infringement. But with similar sites cropping each day, the industry of illegal music downloads had already turned into a wild beast that had no stopping.

Spotify — the ultimate solution to piracy!

The only real way to stop this beast was to create a better alternative. A superior service that allowed users to listen to music for free but through legal means.

David Ek, the MAN behind Spotify, had a Eureka moment when he realized that music streaming could be a possible solution.

Ek, along with his co-founder Martin Lorentzon, launched a small startup in Stockholm, Sweden, called Spotify.

But, Spotify didn't jump the gun to capture the global market from the very beginning. No, it first started small.

For the first few years, Spotify entirely focused on the European market. The idea was to create an extensive catalog of music that is accessible to people for free. So, they spent their early days legally licensing music in Europe.

In 2008, Spotify was launched in Europe with a freemium model. Eventually, after making deals with US-based record labels, Spotify came to the US. Today, Spotify operates in more than 180 countries & has become a truly global business.

How does Spotify make its billions?

Since Spotify's very humble beginnings, the company has grown to a valuation of $32B. In 2021, Spotify made $11B US dollars. So, how does Spotify make money?

Spotify is most popular for its freemium model. Here's how it works.

Spotify first attracts a large number of users by letting them stream music for free. The free tier has all the basic functionalities. But, it also comes with ads.

That changes when you go Premium. For $9.99 per month, you can listen to music ad-free & offline. Many users feel that premium really changes the streaming experience. The numbers speak for themselves.

Another way Spotify generates revenue is by running ads for users in the free tier. Advertisers pay Spotify an amount of money to promote their products.

Apart from running ads for the free tier, Spotify also generates ad revenue through podcasts. I'll cover more about this in the coming sections.

But, here's the question, Spotify was built to stop illegal music downloads and help the music industry. So, did it work?

Now, of course, the tech giants could smell the sweet cash flowing from the music streaming space. So they had to get in!

The trinity, Amazon, Apple, Google, all created their own music streaming platforms, namely,

It seems daunting to compete with not only Apple but also Amazon & Google. But Spotify has still successfully held ground, beating these giants by a long shot!

While Spotify has 180M premium subscribers, the others are still in the below 100M range.

If you look at the premium subscribers split, Spotify accounts for 32% of users, while Apple has 16%, Amazon 13%, and Google 8%. 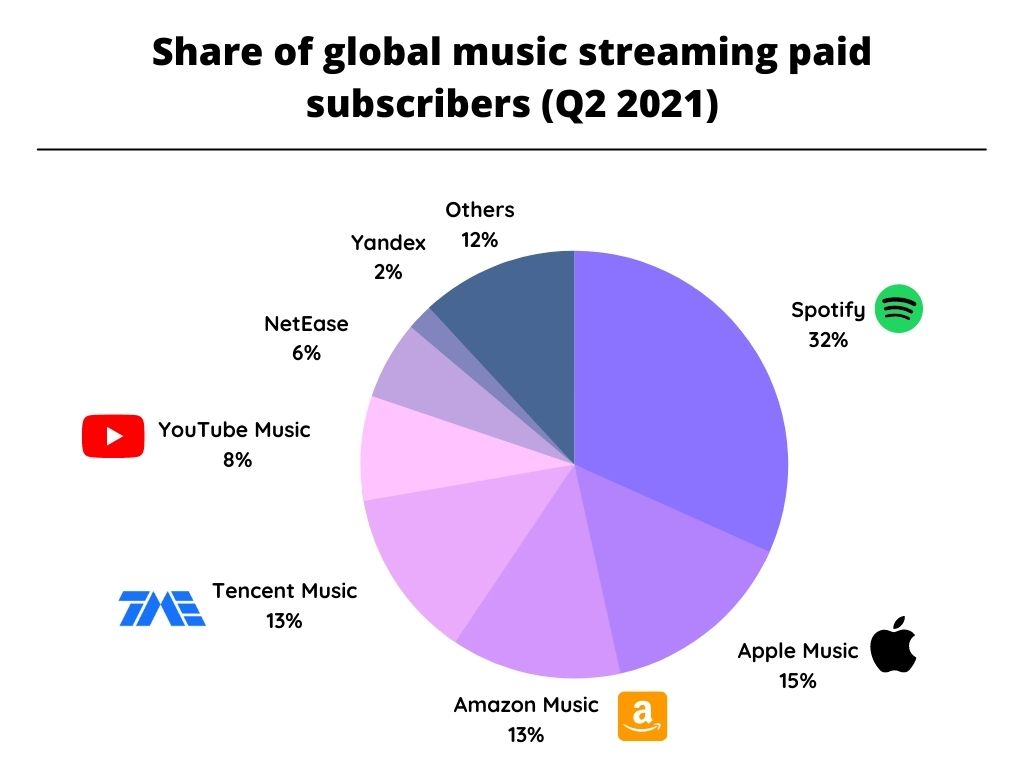 That's fantastic, right! But how did Spotify manage this?

Well, here are a few reasons

Ek has high ambitions of transforming Spotify from a music-centric platform to an audio-first platform via podcasts!

In 2019, Spotify announced that they'll be spending $500M on podcasting. So, for the past 2 years, Spotify went on a spending spree to acquire platforms & podcasts alike.

Most notable acquisitions include platforms like Anchor, Gimlet, Megaphone, The Ringer, etc.

They have also signed deals with high-profile personalities like Joe Rogan, Michelle Obama, Duke & Duchess of Sussex, among others. By the end of 2021, Spotify had 3.6M podcasts on its platform.

Spotify is already doing very well, so why make this move towards podcasts? Well, there are a few reasons:

Spotify plans to improve its profits margin by monetizing podcasts with advertising revenue. The podcast ad spent just in the US was 1.35 billion dollars in 2021. So overall, the podcasting space is extremely lucrative for generating revenue through ads.

So, is the bet paying off? Well, Spotify's podcast ad revenue increased by 627% in Q2 of 2021, so clearly they are doing something right.

Ultimately, Spotify is betting big on podcasts to improve its profit margins. But weirdly, Spotify's venture into the podcasting world is the very reason why it's facing so much backlash today.

In spite of being the hero who revived the music industry, most people today believe that Spotify is a supervillain character that's taking cash away from artists.

Confused? Well, hold on till next week when I'll cover in more detail about Spotify's payout structure and why it's at the center of all controversies. Amid this, a serious discussion about Spotify's compensation to artists took center stage. But, why do artists hate Spotify? 1) Spotify only pays a mere $0.003 per stream. Which one of the lowest among all platforms. 2) Only the top 2% of Spotify's 8M artists make more than $1k per year.

Here's how the royalty payment MATH is calculated: Royalty Payout = (negotiated royalty rate %) x [Spotify's monthly revenue x (# of artist streams/total streams)] Of this total payout value, only ~15 to 20% (depends on the artists contract) goes to the artist.