Spotify has faced quite a lot of heat from listeners and artists due to recent controversies. It lost $2B & its share price dropped by 25%. Let's find out why artists dislike Spotify!

Amid this, a serious discussion about Spotify's compensation to artists took center stage. But, why do artists hate Spotify?
1) Spotify only pays a mere $0.003 per stream. Which one of the lowest among all platforms.
2) Only the top 2% of Spotify's 8M artists make more than $1k per year.

Here's how the royalty payment MATH is calculated:
Royalty Payout = (negotiated royalty rate %) x [Spotify's monthly revenue x (# of artist streams/total streams)]
Of this total payout value, only ~15 to 20% (depends on the artists contract) goes to the artist.

Spotify has been through a very cinematic 'hero to villain' arc over the past few years.

Back in 2006, when the music industry was in a grim state, Spotify was a literal god-sent gift!

The industry was losing billions due to the surge in illegal music downloads. So, David Ek came up with a solution — a music streaming platform that compensates musicians while giving users access to a global catalog of music for free!

Sounds like the perfect solution, right? Fortune magazine, in 2019, even declared that "Spotify saved the music industry".

But, even though, you and I, as users, probably love Spotify, the artists who actually create music are not so thrilled. Now, with the recent controversies, the dispute has gotten more limelight as well as public outrage.

So, why exactly are people turning on Spotify? And is Spotify really a supervillain? Well, let's find out!

So how did Spotify get into trouble?

Last week, we discussed how Spotify is moving towards podcasts with the aim to become profitable. Following that decision, Spotify made a major purchase.

It spent a whopping $100M to acquire the exclusive rights to Joe Rogan's very famous podcast. The major attraction being Rogan's 11M listeners.

All was well until a few months back when Rogan came under fire for spreading Covid misinformation & using the n-word a bunch of times in his past videos.

This, of course, upset a lot of people, with many demanding Spotify to de-platform Rogan. Spotify, ultimately, didn't budge to the demands, so musicians like Neil Young & Joni Mitchell decided to boycott the platform altogether.

Amid all this, a long-standing discussion about Spotify's unfair compensation to artists took center stage.

Seeing one controversy after another, Spotify clearly hasn't had a great start to 2022. Spotify lost more than $2B in market value after Neil Young pulled his music from Spotify.

On top of that, its share price also took a real beating and dropped by 25%!

But why exactly do musicians dislike Spotify?

For starters, most musicians don't find Spotify to be a lucrative platform to host their music. Even when artists get millions of streams, the success rarely gets translated into actual dollars.

Let's get into the numbers. So, on average, Spotify pays 1/3rd of a cent for each stream. That is a mere $0.0034 for a single stream or $3 for 1000 streams. If you compare that with other streaming sites, Spotify actually has one of the lowest payouts per stream values. 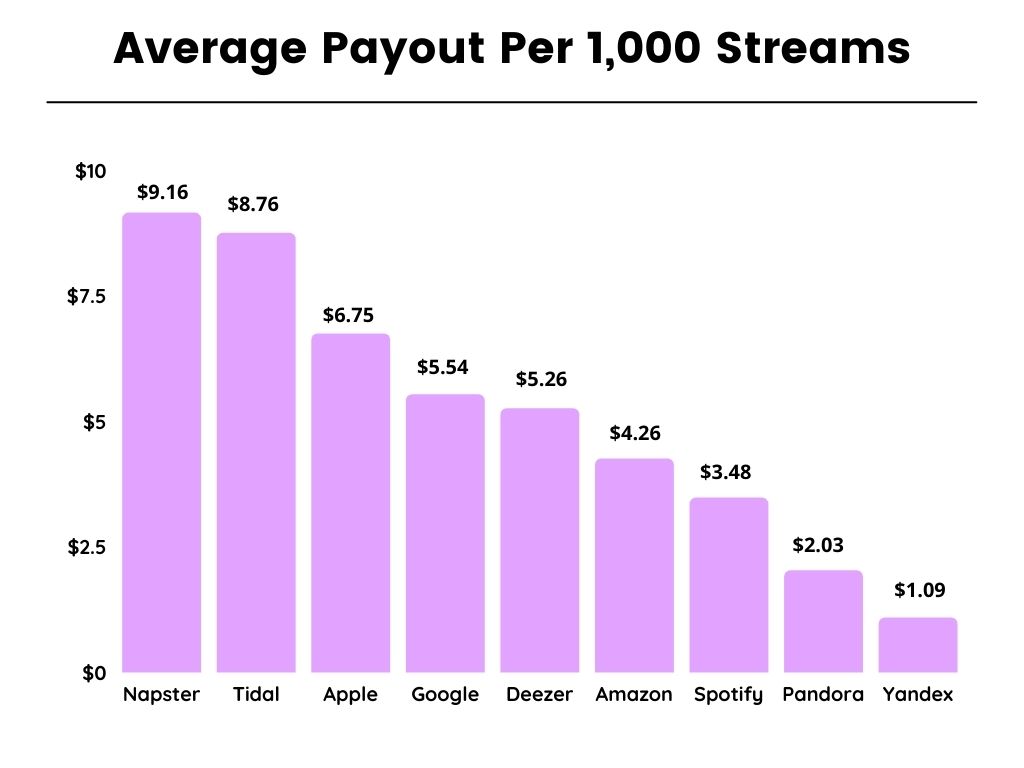 This is in spite of Spotify having the largest share of global users and making 20% of the global music streaming revenue.

But, wait, it gets worse. Of over 8M total artists on Spotify only 2% of users make more than $1k per year. So majorly, the top 1% of Spotify artists are the only ones making any revenue from the platform.

Some artists even state that lesser-known sites like Bandcamp make them more money compared to Spotify.

But, Spotify has always insisted that it is a marketplace for artists to make a living. So what happened to that?

Well, the answer lies in the royalty payment system that Spotify follows, which is frankly very complicated & the major reason behind the dissatisfaction.

Got it! So how does the royalty payment system work?

Well, here's the deal. Spotify doesn't directly pay artists and songwriters based on their individual streams. Instead, Spotify pays a share of its revenue to the "Rights Holders".

The exchange is purely between Spotify & the "Rights Holders". Here's how the royalty payment amount is calculated.

So, ultimately, all parties are essentially fighting for scraps unless they get multi-million streams each month!

But is Spotify really the devil here?

Let's quickly look at this from the perspective of Spotify.

Finally, many artists claim that even though they get millions of streams, their pockets have not seen any Spotify money. This is because a million streams on Spotify is not very much for the platform. According to the data, over 550,000 songs on Spotify have over million streams. So, the competition is fierce!

But why even get into this fierce competition, when there's no good payout?

Because Spotify is a great platform for artists to get more exposure. Discovering new artists on Spotify is also extremely simple. Many artists have seen their streams go up after being featured on Spotify's playlists.

Is there an alternative way?

You would agree by now that Spotify's situation is complicated, to say the least. And, adding to the confusion, big labels like Sony, Warner Music Group, and Universal all have a combined 18% stake in Spotify. So not only do they make money through their artist's music stream micro-payments, but they also make money via their ownership of Spotify.

Many people have suggested alternate payout methods to solve this problem. Let's look at a few of them:

Of course, all of these changes are easier said than done. Each of these will have a huge impact on Spotify's business or that of the record labels.

In all of this, the fact remains that artists are still paid poorly and that the payout system is inefficient. But it also means that there's a huge scope to solve this.