Outcome Shut Down Cause Competition Closed in 2016

ChaCha (Search Engine), founded in 2006 by Scott A. Jones and Brad Bostic, was an American search engine which provided free, real-time answers to any question through its website or by using one of its mobile apps.

So how was it different from existing search engines like Google and Yahoo? ChaCha had a chat interface where one could interact with a live human, called a “guide”. Instead of searching for answers on your own, you could ask someone else for answers. You could have a chat and interact with the guide during your search.

How did ChaCha work?

1. Human assisted search - a “guide” would chat with you in real-time to help you with your queries.

By 2008, they grew their guide network to 30,000. Each guide could map their profiles to a particular topic they were interested in. When a user asked a question, ChaCha automatically pointed the question to the interested “guide”. Users could dial a specific number from their mobile phones or send questions as SMS from their mobile phones and get answers back from ChaCha’s "guides".

In June 2011, ChaCha partnered with Wolfram Alpha to provide instantly computed facts and answers to questions from over 100 topic areas, such as demographics, definitions, mathematics, geography, and celebrity facts. 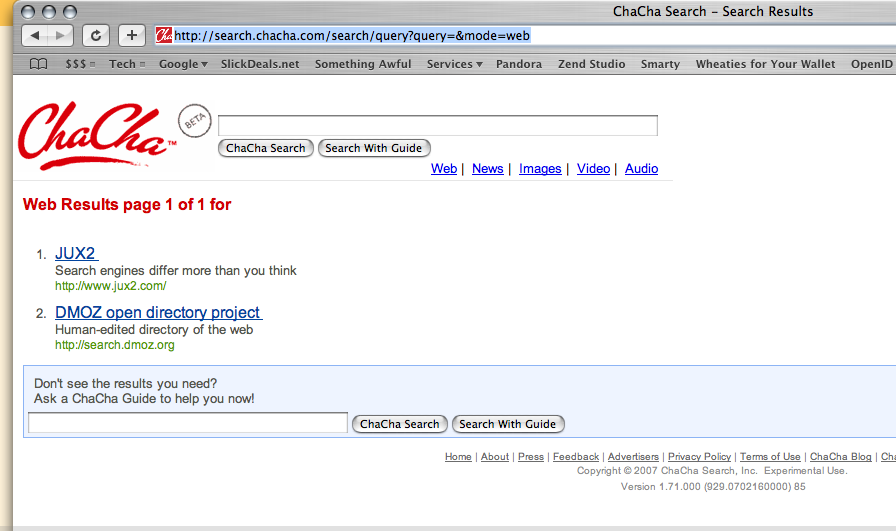 Like Google and Yahoo!, ChaCha relied on advertising to generate revenue. Whenever a personal guide answered a question, It would get stored in their archive, and the library available on the website showed advertisements.

In 2009, a user reported that when he searched for nearby IMAX theatres via SMS, an advertisement was the first result he got.

ChaCha paid around $0.03 per question answered up to twenty cents per question, or an average wage of $2.50/hour to their guides. Jones, CEO of ChaCha, reported being profitable and generating revenue of over $9 Million by the end of 2009.

The Short Success of ChaCha

Bostic and Jones launched the alpha version of ChaCha on September 1, 2006, and a beta version was introduced on November 6, 2006.

ChaCha launched its text messaging-based service in the United Kingdom in August 2011, . The same month the company reported having answered over 1.7 billion questions.

The Downfall of ChaCha

In April 2009, co-founder Brad Bostic stepped down as company President, saying that the company no longer needed him for day-to-day operations. He also showed concerns over the company’s inability to gain profitability in the global recession.

In 2011, ChaCha started to experiment to launch its service worldwide, starting in the UK in September. But just nine months later, they shut down their operations in the United Kingdom, stating that "adoption rates for new price-competitive services are quite low in the UK."

Back in the day, the search engine algorithms weren’t too evolved; you had to search 4-5 pages manually to get the desired result. Google released its Panda algorithm back in 2011 that virtually pushed down the results from sites like ChaCha, Ask.com, and Answers.com. This proved to be a significant reason for ChaCha’s failure.

By 2012, Google started working on ways to understand human language and provide accurate search results even to complex queries. With mobile phones coming in, it became difficult for users to use ChaCha as a search result, and they started to shift towards Google.

Management and operational issues also became a significant reason for Chacha’s failure. They had 50,000 part-time “guides” to answer the queries of a million users. This became difficult for the guides, especially if the user asked long theoretical questions.

In 2015 Scott Jones started looking for ways to land an offer from an investor or sell the company. However, when traffic on desktop and mobile started to decline, this didn’t help.

So Is ChaCha still a thing- No, In November 2016, ChaCha discontinued the guide program due to having insufficient funds available. By the next month, ChaCha shut down operations due to declining advertising revenue, leaving them unable to service its debt.

Even though their idea of introducing the human touch to search results was innovative, it wasn’t sustainable. ChaCha failed to crack a working business model. Fox News had reported ChaCha is planning to charge users $5–10 per month once they exceed ten queries, but the company denied the rumours.

When Users sent their queries via SMS, Standard messaging fees could apply, but ChaCha never charged additional fees. They burned cash trying to make a flawed business model work; instead, they could have tried to work out other revenue streams. Many people claim that even startups like Google go through ups and downs while figuring out their business model. However, when Google went public in 2004, it was already generating loads of profits. In the long term, profitability should be a critical metric to assess a startup’s long term success.

ChaCha failed to evolve, they could have decreased their reliance on humans and worked on improving their Search Algorithms.

ChaCha relied on other search engines for traffic, but Google had started penalising human relied search engines in their Search Engine Rank Positions. Quora, working on a similar model, has the same risk. But it has built a community which can even survive if Google kicks it from search results. Also, Quora never pays its contributors but instead gamify the answering using the Social Media Mechanism.

Although ChaCha turned out to be unsuccessful, there were some great lessons in their journey.

“While failure is never a pleasant experience, there are many good things that can spring from it, as is constantly demonstrated in places such as Silicon Valley, where failure is sometimes even considered a badge of honour.” these were the words of Scott Jones, founder of ChaCha. Eric S. Yuan is a Chinese-American billionaire businessman, engineer, and the chief executive officer and founder of Zoom Video Communications, of which he owns 22%. Daniel Saks is the President & Co-founder of AppDirect, the company empowers B2B eCommerce activities like purchasing, selling, and managing software services like SaaS and DaaS.