Post money valuation refers to the value of the business after the investor has invested money.

Post-money valuation is essentially what the company is worth after taking into account the amount of investment. It is a common method of valuing a company in an M&A transaction.

The next section discusses the different types of financing rounds and their significance for founders and investors.

When raising funds, investors often examine whether the company's current pre-money valuation is greater than its previous post-money valuation. This is to ascertain whether the business has grown since the last investment. This brings us to the types of financing rounds.

There are three types of financing rounds: up round, down round, and flat round.

An up round refers to a financing round that raises capital at a higher valuation than the last round.

A down round is the opposite of an up round, and it is when a company raises funding at a lower valuation than the previous financing round.

A flat round is when a company raises funding at the same valuation as the previous financing round. Since there is no change in the valuation, it is referred to as the Flat Round.

Up round and down round scenarios are closely followed by founders and existing investors since they determine the company's future.

An up round indicates that the company is continuing to grow and is moving in the right direction. In contrast, financing a down round is commonly viewed as a desperate attempt to raise money. As a result, a down round financing usually results in dilution for existing investors.

As a way to better comprehend this concept, we will look at an example of post-money valuation.

An angel investor invests 2.5 M into the company, creating a post money valuation of 12.5 M. This makes the company worth $12.5 million after the investor has put money into it.

As a result, the investor would own 20% of the company, since $2.5 million is one-fifth of the post-money valuation of $12.5 million.

Post money valuation formulas are used to determine the value of a company after receiving an investment. They are used to calculate the worth of a venture after the money has already been raised. 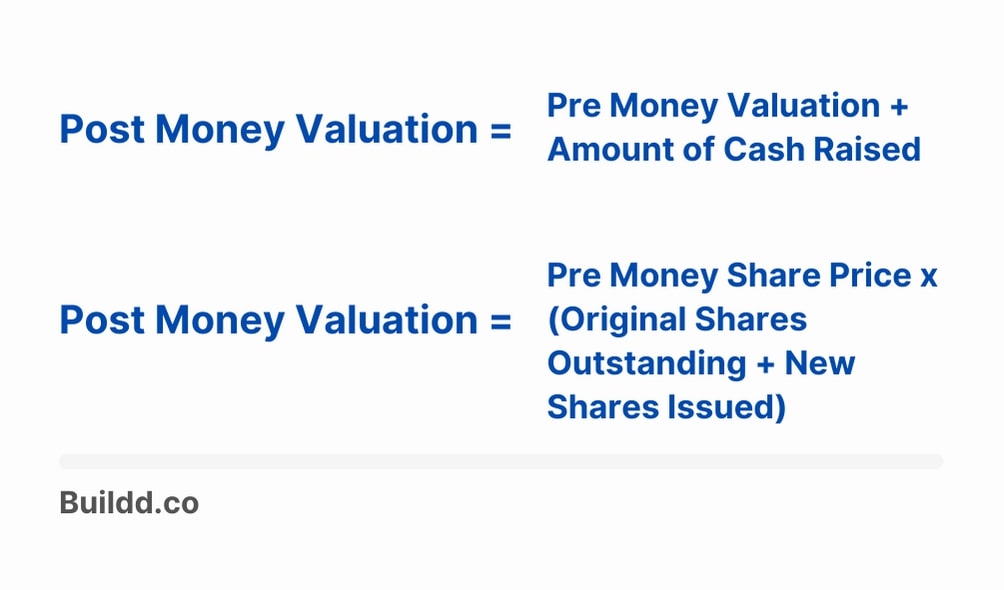 If the pre-money value is not known, then we use the following equation.

Post Money Value = Investment into the company/ Percentage of Ownership

Let's say an investor is willing to invest $10,000 for a 10% ownership stake in the company. Using the formula above, we can determine that the post money valuation is $100,000.

Based on the investment amount and investor equity percentage, the tool calculates the pre-money and post-money valuation. It is an effective way of estimating the worth of your company when you are looking for investors. Learn what Burn Rate is, How it is calculated, Examples and how you can reduce burn rate. Find out all you need to know about Liquidity Event in this blog. Learn what it is, types, reasons and examples. Learn Who Angel Investor is, Where can you find them, why should you raise funds from them, difference between angel investor and Venture Capitalists, Angel Investors Eligibility