How did No-code platform Webflow go from bankruptcy to a $4B valuation on their 4th try?

In deep debt of $60,000 dollars, with 2 kids and a near brush with bankruptcy, Webflow founder, Vlad Magdalin, persisted for over 10 years to bring his dream project to life!

The startup world is absolutely BRUTAL!

About 90% of startups fail within the first year.

So you have to be a BEAST to survive all the anxiety, uncertainty, and turmoil, till things eventually work out.

Webflow's founder Vlad Magdalin is one such beast!

In deep debt of $60,000 dollars, with 2 kids and a near brush with bankruptcy, Vlad persisted for over 10 years to bring his dream project, Webflow, to life!

Today, Webflow is a top-tier no-code tool that makes $100M in revenue and is worth $4B.

So, here's the tale of Webflow's survival journey & how Vlad Magdalin finally got it right on his 4th try during his decade-long struggle!

A bit of backstory…

Vlad and his brother Sergie Magdalin (also, Webflow's co-founder) are both refugees from Russia. Vlad's parents moved with their 6 kids to the US on a mere whim with empty pockets, days before the Soviet Union collapsed back in 1991.

Naturally, being a Russian family in the post cold war United States was no walk in the park.

Vlad's father had to learn English from scratch. And since he didn't have any real skills, he'd take up hacky jobs to make ends meet. For the longest time, they survived on welfare.

But, the hardest times buildd your character the most!

Watching his parents take immense risks all in hopes of a better life was a huge teaching experience for Vlad!

He saw his parents slowly take these "entrepreneurial steps", and figure out different survival means to make a living for the next month or the next year. Seeing them eventually buildd a solid and stable life this way was a huge inspiration!

This helped Vlad develop his entrepreneurial sense and grit. And, prepared him for the scorching journey Webflow would take him through in the coming years!

The No-code Vision: Why do you even need developers?

Now, as teenagers both Vlad and Sergie were looking for means to make money.

They started freelancing in high school. And, later launched their own agency in college. So basically, Sergie would design websites for clients and Vlad would use the design to buildd a website using WordPress, Joomla, etc.

Sergie absolutely loved designing. But, it was a different story for Vlad! Vlad was tired of the repetitive tasks that came with implementing a design. For example, he had to set up an SQL database for all the content on the website.

So, Vlad thought to himself how great it would be if Sergie could buildd a website all on his own without needing someone to translate the design into code.

After all, software for creative design like Photoshop was already available. So why can't web designing also be just a creative and intuitive process without the need to write thousands of lines of code?

This idea stuck with him and it was the first seed that eventually morphed into what Webflow is today. 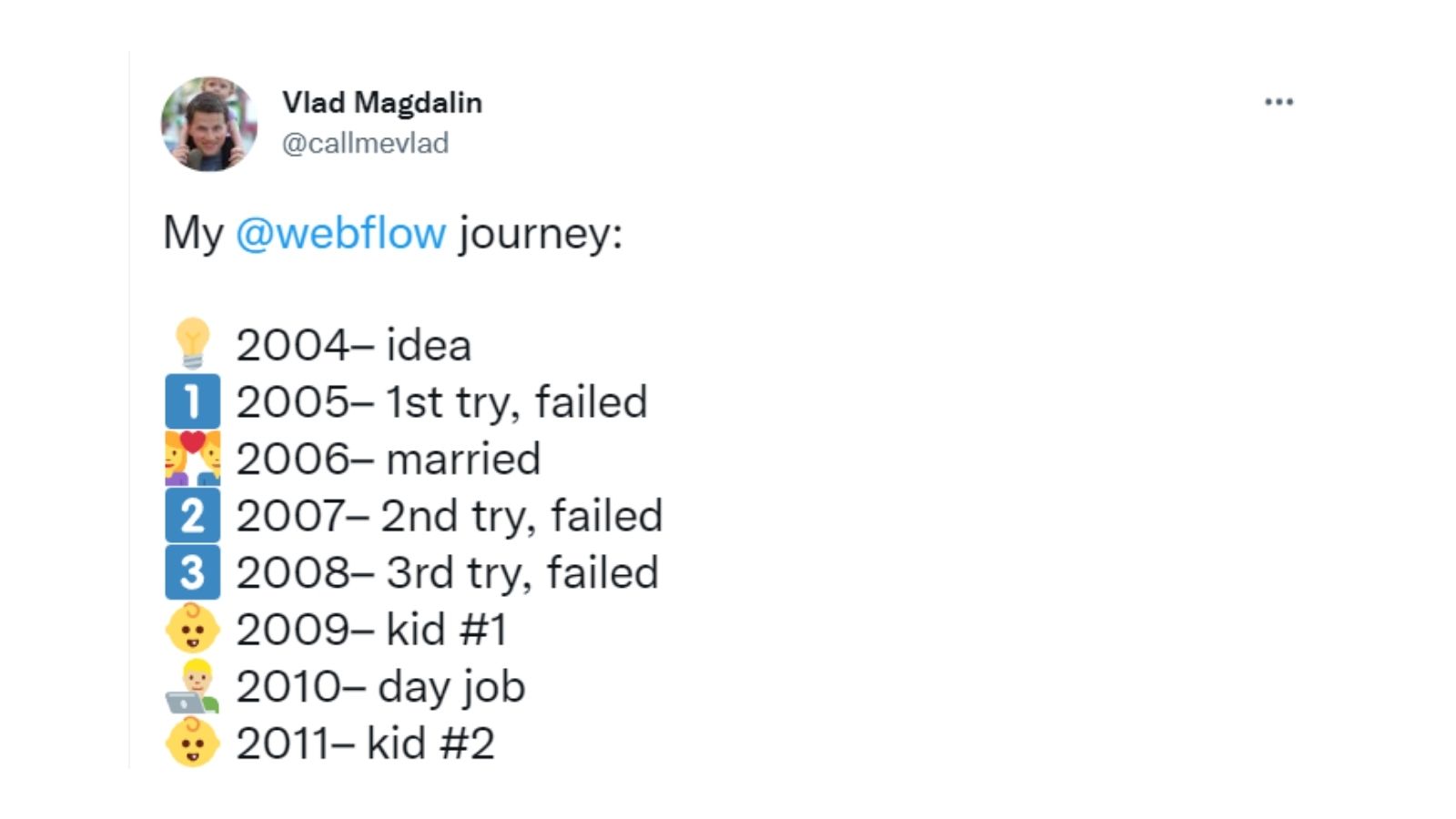 Vlad had a stable software job at Intuit for 6 years. But, he had to have another go.

In 2012, he started working on Webflow by himself while juggling his day job, but he realized that going in full-time was the only way to become successful.

Later that year, his brother Sergie and colleague from Intuit, Bryant Chou, joined him as co-founders!

At that time, Vlad was sitting on 3-months of cash, and with 2 kids (his daughter was severely ill and needed surgery) and no income. They were in desperate need of funding.

They applied to YC immediately but got rejected in the November of 2012. So, to stay afloat, Vlad:

Pulling out money from his 401k & the massive credit card debt left him & his family without a safety net.

They tirelessly worked for 6 months straight without paying themselves. But, they were quickly running out of money. So, they had 2 options - either give up and go back to their jobs or give this a final shot!

First success: Getting into YC

Now, given the dire situation, Webflow needed funding and they needed it now!

In March of 2013, they had a working prototype ready, so they submitted it to YC's Hacker News. The post blew up with 20k users joining the long queue for their upcoming beta program! 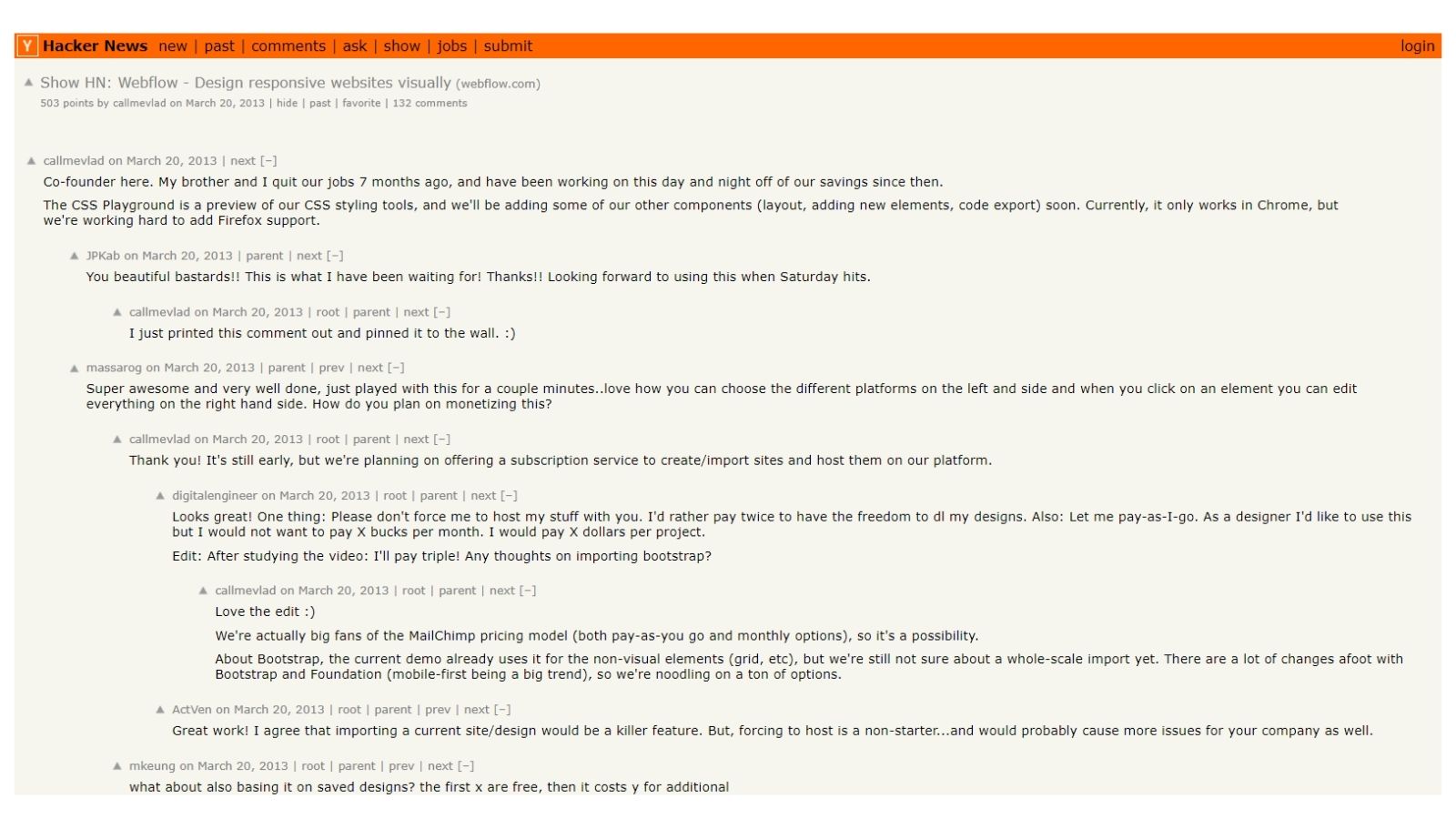 With this win under their belt, they reapplied for YC and got in! On their YCombinator Demo Day, Webflow successfully raised close to $300K.

But, everything didn't all work out yet.

Even after getting into YC, there was still a lot of skepticism around Webflow.

But nevertheless, they were able to raise a seed round of $1.4M, combined with an additional $1.5M. The extra $1.5M went a long way to keep them afloat!

Building for a single community first

During their early YC days, investors were pushing the trio to acquire more enterprise customers. The idea was to replace the likes of WordPress, Wix, GoDaddy, etc.

But the founders believed they had a unique offering & product. They wanted to focus solely on building a reputation in one community first -- the design community.

They went against the traditional wisdom and instead focused on having startups as their core customers. It took them 5 years to work on this, and reach a stage where they were profitable & generating sizeable revenues.

Now, after their first funding round back in 2013 and the external push to focus on enterprise customers, Webflow went completely rogue!

Vlad was very much freaked out about "venture capital coming in and destroying companies". So they decided to buildd Webflow the "bootstrapped way" to first become a self-sustaining, profitable business.

The goal was simple - they wanted their customers & their vision to drive their decisions.

At that time, although Webflow was raking in early adopters, the number of paying customers were only a handful. For example, out of the 20K who signed up for the beta version, 50 were paying customers.

Although this conversion rate was disappointing, they very quickly realised that the focus should be on retaining these users! They created an excellent customer support forum for them, so all three founders were available at all times to respond to their queries.

Now to address the profitability issue, Vlad wanted to slow down the rate at which they were burning cash. Their payroll expenses far exceeded their monthly revenue. So, they only hired new people depending on what their revenue would allow.

This worked, and they finally reached the break-even point to become profitable!

After 4 years of avoiding any funding, Webflow was back in the game. But, this time the VCs were chasing them!

Its current valuation is a whopping $4B with annual recurring revenue of $100M. So, from the early days of debt, the team has truly come a long way!

Now, a decade after the idea was conceived, Webflow is still pushing the boundaries of what a no-code platform can be! Their ultimate goal is to democratize software creations & it seems like they are well on their way to achieving this!