Discovering competitors for your startup idea is a validation of the market, NOT a source of sadness.

A startup might FAIL. But, an entrepreneur does not!

Every failed startup attempt brings with it a trove of lessons that serve as a foundation for your next attempt. So, when you go at it again, you no longer start from ZERO but level up to ONE!

The duo protagonists of today's story didn't fail once but they failed twice. And, with this experience, they built BrowserStack — a SaaS company for developers.

Today, BrowserStack makes $200+ million dollars in revenue & has a valuation of $4B. What's more interesting is the fact that they were bootstrapped to $50M revenue and $40M profits for the first 7 years!

There's a lot to learn from their unique adventure. So, here it goes!

Let's first introduce our protagonists — Ritesh Arora & Nakul Aggarwal. Ritesh and Nakul were roommates at IIT Bombay while they were studying Computer Science.

Both of them had set their hearts on becoming entrepreneurs. And, given the reality that any company would be glad to hire an IITB CS grad at any point, they were ready to take the plunge.

Ritesh specifically came from a hardcore business family where everyone in his close relation had taken the entrepreneur route for years.

So, Ritesh & Nakul started working on their first startup during the final year of engineering.

It was 2005, and Ritesh got very interested in the topic of Sentiment Analysis. Apart from his love for entrepreneurship, he was passionate about research.

The problem statement was simple:

So, they wanted to buildd a piece of software that would derive those insights from data and present them to users.

The idea was to have this software as a layer on top of companies like Amazon & Flipkart. While the idea seems promising, things didn't eventually work out.

They worked on the product for almost a year & approached several VCs. But, after a run of 50 VC meetings and all rejections, they eventually had to dump the idea.

Eventually, Ritesh and Nakul had to take up day jobs to support themselves after graduating. The duo joined Lime Group and worked there for 3 years.

But, the startup bug was still alive and thriving!

Their second attempt was another software company focused on information aggregation. To explain it simply:

Unlike the first attempt, this idea got a lot of traction. It was number one on Hacker News & got sizeable traffic to its website. But, there was an obvious problem with this idea.

Ritesh & Nakul had built a product but they didn't know how to monetize it. So, another idea in the graveyard.

Two failed startups are enough to crush your hopes. But, Ritesh and Nakul learned very important lessons through these attempts!

Now, both the previous attempts had the same obvious problems. Although the idea was interesting, they didn't know how to:

The flaw here was in the approach.

You see, in both cases, Ritesh and Nakul started with an idea and began building the product. They employed artificial intelligence and machine learning to solve the problems (a rarity for 2005) and pulled it off!

Now, this approach helped them buildd a great project but not a good business. So, they had to start thinking like entrepreneurs rather than engineers!

And so, their search for a universal problem began.

Ritesh and Nakul spent over a year looking for a good problem but all the efforts were entirely in vain. At this point, they had also quit their jobs, so the stakes were extremely high.

That's when a great idea came along. You see, although the duo had failed in marketing their product they still succeeded in building very complex software. So, their friends and family suggested that they could instead start their own consultancy business.

That's how their 3rd startup, Downcase, came to be which was a profitable venture & an instant success!

The consultancy company was a much-needed lifeboat for the duo. And, it allowed them to stay on their entrepreneurial journey and also sustain themselves.

Start as a service, buildd product later A service business brings you immediate revenue & cash flow. So start by making your offering a service (eg. consulting) while building your product on the side.

Discovering THE problem to solve!

Their search to discover a universal problem ended while they were working on Downcase.

Ritesh and Nakul were preparing to scale their consultancy company and for that, they needed to buildd a website. Nakul quickly used a simple WordPress theme to create a site within 2 days. Now, the only task remaining was testing.

Nakul & Ritesh both despised testing and they got into an argument over who'll be testing that day. That was the EUREKA moment!

The duo thought to themselves that surely they cannot be the only developers who hate testing. After all, building a website in 2 days & testing it for 4 days doesn't sound fair or even productive.

A quick one-day search on Twitter showed that developers were not only facing the same problem but they were also extremely vocal about it.

If this problem had troubled over 1000 developers to harass Microsoft every day on Twitter. Then, it was surely a problem worth solving! But, what is so bad about testing?

So, Nakul and Ritesh set on buildd their very own one-stop testing software — BrowserStack!

Version One — The Internet Explorer Proxy!

Since all the Twitter complaints were exclusively directed towards Internet Explorer, BrowserStack first wanted to tackle that.

They only focused on building an Internet Explorer testing software. The tool was ready in 4 months & was released as a free version for the many Twitter developers. The product was an instant HIT!

Ritesh and Nakul, eventually reached out to John Resig, jQuery founder to get his feedback on the product and he was instantly thrilled that someone was finally solving this problem. 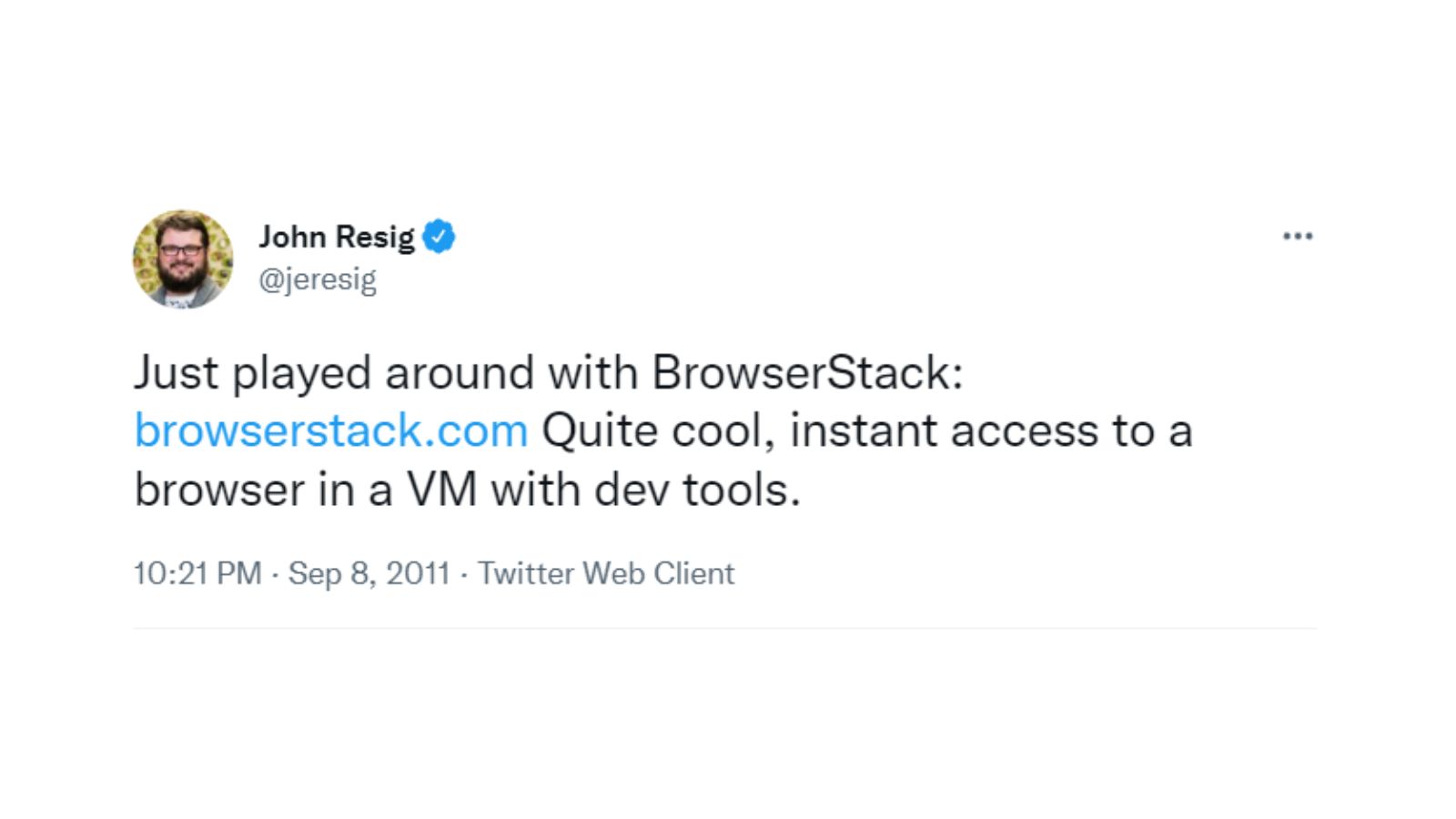 He tweeted about BrowserStack which resulted in the company gaining 10K beta users in 3 weeks!

As more and more developers started using the product its popularity increased. People started demanding a paid version with better functionality. So, Ritesh and Nakul got working on that.

They released the second version in a couple of months. And, on the first day itself, they got 10 paying customers.

They didn't sit for a year to buildd the best product that allows users to test on all the different browsers. No! They instead focused on the building the solution that was most in demand.

Rise to $4B valuation

Since the paid iteration in September 2011, BrowserStack has gone through many more evolutions. From incorporating cross-browser testing to automated testing, to mobile testing.

And, as the product improved, so did the revenue!

Within 6 months of the first release, BrowserStack acquired 1k paying customers. And, within a year, they scaled to $1M revenue!

All with a team of 2, i.e. just the founders - Ritesh and Nakul working in a simple coffee shop!

In 2018 when BrowserStack was making $50M they decided to take VC funding. But, the goal was never to benefit from the cash infusion but to get experienced advisors who could help BrowserStack scale to the $100M revenue mark.

Today, they make a crazy $204M in revenue and have reached a $4B valuation!