Zerodha, a unicorn, bootstrapped startup saw record high revenue in FY22. It's profits jumped by 50% with ZERO money spent on marketing. So, how did it do this? Let's find out!

If your startup gets funded, you're considered successful. Doesn't matter if you've a viable business or not.

In this funding-obsessed environment, Zerodha's founders, the Kamath brothers, have managed to buildd a truly successful business. Not just that, in a very real sense, they have "disrupted" the traditional broking industry in India.

So, how did Zerodha do this?

Well, here's the story of a 30-year-old trader who had the courage to spend all his savings on building a brokerage firm during the cusp of the 2008 financial crisis!

The story of the Kamath brothers!

Nithin Kamath's journey is quite unique. For most of his life, Nithin has worked as a trader.

He started trading when he was 17, mostly influenced by his Marwari friends. Later, in the early 2000s, derivatives trading was first introduced in India. So, Nithin started trading online and in the first of many instances, he went bust in 2002!

Just to support himself, Nithin was working at a call center at night, so he could trade during the day.

This went on for several years until 2005 when Nithin met an acquaintance at the gym who was super impressed by Nithin's trading portfolio. He handed Nithin an INR 25 lakh cheque to handle his trading account.

With this opportunity, Nithin could quit his call center job and trade full-time!

He received several more accounts to handle. But, there was no single online terminal that allowed him to switch between these accounts with ease.

So, in 2006, Nithin joined Reliance Money as a sub-broker which gave him access to a single platform to buy and sell from all his accounts. He continued working as a sub-broker till 2008-09.

While Nithin was building his career as a trader, his younger brother Nikhil, a chess wiz, dropped out of school to play Chess full time! Nikhil also started trading as a teen following in his brother's footsteps. He later became a sub-broker with Way2Health.

The brokerage industry is a 145-year-old fossil. Typically, old-school trading communities are tight-knit groups that mostly operate in their own circles.

This includes all the traditional broker firms that are used to operating in their age old, rigid ways.

In 2009, by the time the idea of Zerodha started brewing, Nithin had already worked with several different brokerage firms. So, he knew the industry in and out.

With Zerodha, he simply wanted to become a broker he never had.

He decided that the industry needed a makeover on several different fronts:

Nithin's focus was to solve problems on these 4 fronts, which would make Zerodha a game-changer in the coming years!

Now, let's go back to 2010. It'd been only 2 years since the financial crash. The global and the Indian economy were both HIT hard!

During that time, approximately $12B dollars worth of investment was withdrawn from the stock market.

In contrast to the grim year everyone else had, Nithin Kamath had just struck the JACKPOT. Like the savvy trader he is, Kamath had short on the market, which produced ~900% returns!

Burned out from trading, Nithin suggested his younger brother carry on with trading. He, instead, decided to focus on building Zerodha.

Having gone bust several times in his career, Nithin initially did seek VC funding. But, no VC was keen on funding an online brokerage firm after 2008.

So, Nithin spent INR 1.7 Cr he had saved up to get things started. Majority of this money went into buying exchange refundable deposits & creating a workable office space. With everything in place, it was showtime!

The New Model: How was Zerodha different?

Next, Zerodha had to differentiate itself from its competitors. They had to replace the traditional model with the new model. Here's how they did it!

The first thing Zerodha did to tackle this was to post a simple Brokerage Calculator. This was just a simple excel sheet added to the website!

All you have to do is enter the buy and sell price along with the quantity and it will automatically calculate your total charges.

Today, instead of an excel sheet, you'll find a dedicated page for a brokerage calculator that looks like this. 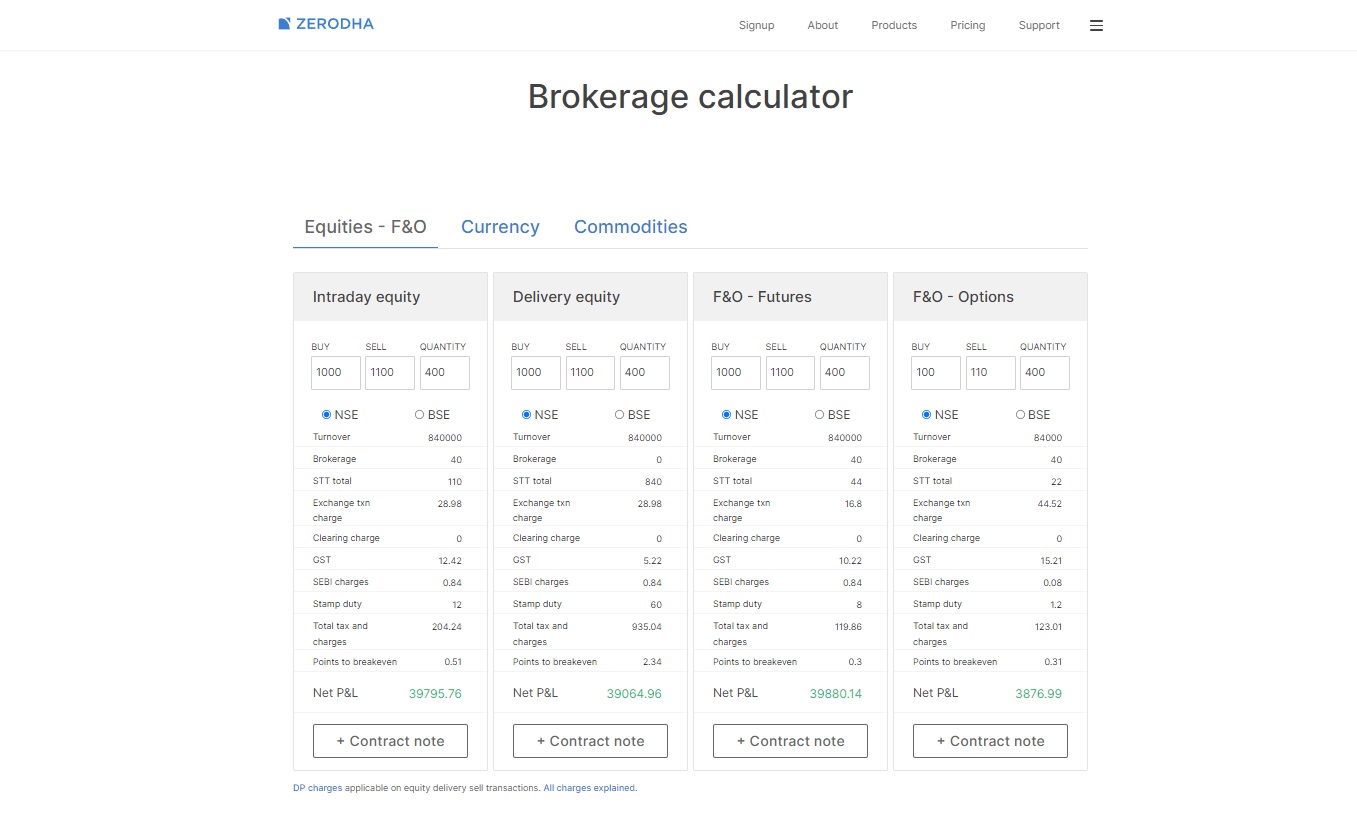 Well, this bit was simple. The entire idea was to buildd a digital platform that helped people trade directly online.

The tricky part, however, was going to be to change behaviour and push people to use the online platform.

Since the size of trade didn't affect the operation cost whatsoever, Zerodha went ahead with a flat fee model. For each order, you have to pay a flat fee of INR 20.

Let me explain this with an example.

Typically, a broker would charge you 0.5% per trade.

So, if your trade value is

Now, given only ~30 lakh people were trading at that time, Nithin's goal was to make trading accessible and easy to learn.

In the beginning, Nithin started writing blogs that would cover basic trading-related terms, give market advice, etc. Today, Zerodha has a separate product called Zerodha Varsity that has curated educational content on trading! 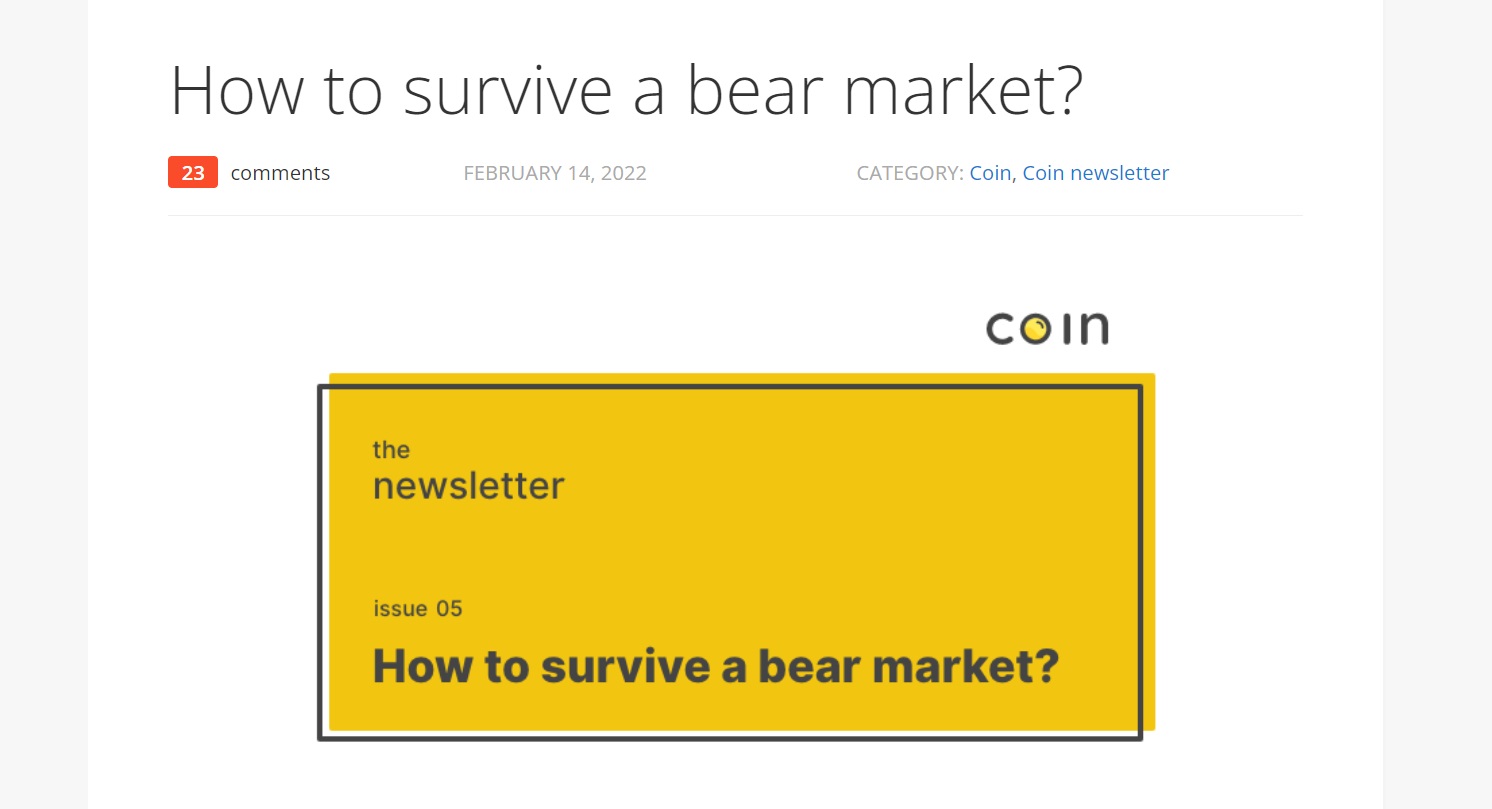 So, while Zerodha targets an existent pool of traders, it's also worked towards expanding that pool. This strategy has done wonders for their user growth.

Zerodha was solving the right problems, but was that enough?

At that time, Zerodha's operational model was a game-changer. So much so that they received threats from traditional brokers over their flat fee model!

On paper, Zerodha was a perfect solution for traders. But, having a perfect product is never enough to start getting the first few customers you desperately need. In fact, it took Zerodha a couple of years to truly get the momentum it has today!

Now, you know the Kamath brothers didn't spend money on ads. So, how did Zerodha work on acquiring customers? And how did the number of users go from 0 to 6.5M in just 12 years?

Well, we'll be covering Zerodha's marketing strategy and more in the next article. So, stay tuned! Upstox and Zerodha are very similar businesses on the surface: - Both were started by brothers - They both were launched after the 2008 crisis - They also follow the same pricing structure & the ZERO brokerage fee model.

But, although these businesses are so similar, the results they produce are extremely different! Zerodha makes Rs. 1122 Cr profits while Upstox makes INR 72 Cr in losses. This is when their no. of users is very close, 5.5M for Upstox and 6.2M for Zerodha!

This is because of Upstox massive marketing spend. It spent INR ~49Cr on IPL ads this year and they approximately get a return of INR ~9.8 Cr. So they are approximately burning INR 787 to get ONE user!

But, that's not it - 70% of Upstox's users are first time traders who buy stocks and sell them when their price increases. These equity investments only account for 1% of all transactions. So, they are mostly not reliable.

On the other hand, Zerodha has completely focused on getting serious intraday traders who account for the rest 99% of transactions. That's the main reason why Zerodha's revenue is SEVEN times that of Upstox, while their active users are almost the same.