How Slack went from 0 to $1B valuation in just 8 months?!

Slack, from day 1, has been obsessed with their customers. Here's how their obsession helped them go from ZERO to $1B valuation in just 8 months!

"We are not competitor obsessed, we're customer obsessed. We start with the customer and we work backwards" — Jeff Bezos

After studying the growth stories of many startups, one thing is clear to me: the extent of your customer obsession is the best indicator of your startup's success.

Just look at Slack! The seemingly nonexistent chat app instantly shot to fame around 2015 months after its launch in 2013.

But, what's more surprising is the fact that Slack achieved this astronomically quick growth without an outbound sales team for several years!

How a flop game gave birth to Slack?

It was never Stewart Butterfield's intention to create an instant messaging platform for professional teams. In fact, he was hell-bent on buildd-ing a non-combat game.

Confused? Well, let me reel back a little. It was the early 2000s when Butterfield had just sold his startup Gradfinder.com. He began working on this multiplayer gaming project, but unfortunately, after the dot-com bubble crash, they couldn't raise any money.

But, his team had already built an image-sharing app as part of their gaming module. The app didn't work very well initially, but after a few modifications, the app was transformed into the now-famous image-sharing tool Flickr. Flickr soon rose to fame, gaining 100M+ registered users[3]. It caught Yahoo's eye, and the tech giant bought the small startup for ~$25M![4]

After working for Yahoo and Flickr for a couple of years, Butterfield went back to building another game, that was later called Glitch. Soon enough, he realised that Glitch won't take off as his other startup did. So, he needed an alternate plan.

An instant messaging feature was already part of Glitch at that time. Realising the sheer lack of viable team chat applications in the market, Butterfield narrowed down the perfect pivot!

He recycled an almost trash game's contemporary feature and gave birth to a $27B company, that is Slack!

He recycled a failing game's contemporary feature and gave birth to a successful $27B company, that is Slack!

3 people have shared their experience

Right from the bat, Slack witnessed growth numbers that were rarely seen for any tech company in the 2010s. 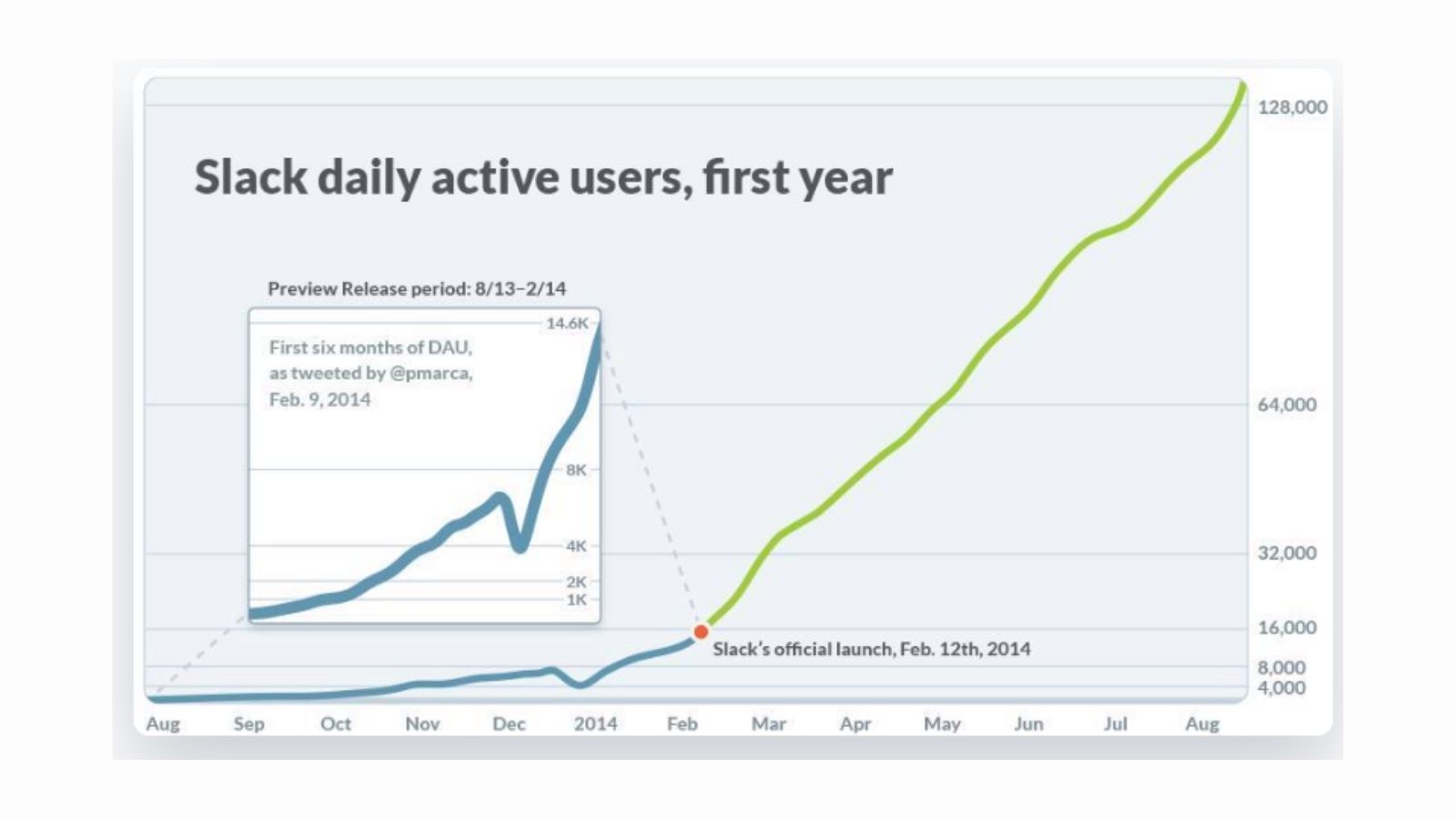 So, Slack is quickly approaching the $1B revenue mark. But, how did they achieve this in less than a decade's time? Well, the recipe for Slack's success lies in its go-to-market strategy. Let's explore it below.

Before Slack's launch in 2013, Steward Butterfield wrote a memo to his team defining Slack's vision with crystal clarity! He lays out 4 main points:[7]

1) Buildd Something People Want, But...

➝ We have something people want, ➝ But, most people have no idea that they want Slack

So, their main goal was to understand what people think they want and then translate the value of Slack into those terms!

2) "Marketing from Both Ends"

Now, they could just translate these "user wants" into marketing terms but that wouldn't be enough. Customers need to witness their needs met in real time through the product. Only then they would vouch for Slack's messaging.

So, their marketing needed to be a 2-way effort

The important part is that Slack doesn't believe in bothering its customers or being excessively verbal or salesy while communicating this.

3) Sell the innovation, not the product

This is the typical "we don't sell saddles here" argument. Slack was not selling a group chat application but it was selling an entirely new paradigm of how teams communicate.

And, their marketing efforts needed to highlight that.

4) Who do we want our customers to become?

Lastly, think about what you want your customers to become. In Slack's case,

Zero to $27B ⇒ How Slack hacked its way to VIRALITY without a Sales team!

So, here's how Slack's goals were laid out:

Here's how this strategy looks when implemented.

The team started working on polishing Slack at the end of 2012, and by March 2013, they were using the app internally themselves.

But, Slack was meant to serve all types of teams. So, they "begged and cajoled" their friends at other companies to test out the product and give them feedback. Most of the early distribution happened through this cajoling.

Butterfield, of course, had many connections in silicon valley at that time. So, he could reach out to a varied set of teams to see how Slack could serve them. Now, the task was tough than you think.

The team communication app space, although is obviously prevalent now, was non-existent back then. Teams either communicated over the mail or switched between a bunch of apps to talk over chat, email, call or video call (still a growing feature). And, more importantly, most teams were clueless about the idea of efficient, easy, effortless communication.

Immediately, they learned that their product worked very differently depending on the team sizes. The team size slowly increased from just a few members of a dev team to over 120 people using Slack at the same time.

As the team size increased, Butterfield and the team made observations and added the necessary features accordingly.

This turned into a pattern. They progressively increased the team size to see how the product works and based on what they observed, they iterated the features.

Once, the product worked fairly well for a large group of teams, they rolled out their beta release (or their preview release). Immediately, 8k people signed up in a day. In 2 weeks, they had 15K active users.

The beauty of this strategy was quite simple. The folks at silicon valley are a highly talkative bunch and they obviously love networking. So, if they love Slack, it wouldn't take long for them to spread the word. And, that's how Slack's "Word of Mouth" engine started churning!

3. From formal, sluggish emails to a virtual workspace

As they kept iterating on the initial product, Slack slowly evolved into a virtual workspace with different users, talking one-to-one and on different channels.

Butterfield firmly believed in this Paul Buchheit's quote — "If your product is great, it doesn't have to be good". So, they narrowed down 3 core features that Slack would be known for:

4. Use socials to spread the LOVE

Now that Slack's product had gone through many feedback cycles and iterations, they were finally ready for the official launch in Feb 2014.

But, visibility to the tool alone wouldn't cut it. Slack's growth was word-of-mouth driven from the very beginning. This worked because people are more likely to check out a product if their friend recommends it rather than watching an expensive billboard ad about the same product.

They needed to replicate the word-of-mouth strategy but at scale. And, Twitter was perfect for this because:

So, Slack's team created the Twitter Wall of LOVE which immediately blew up. The wall of love would receive up to 10,000 tweets in a month! 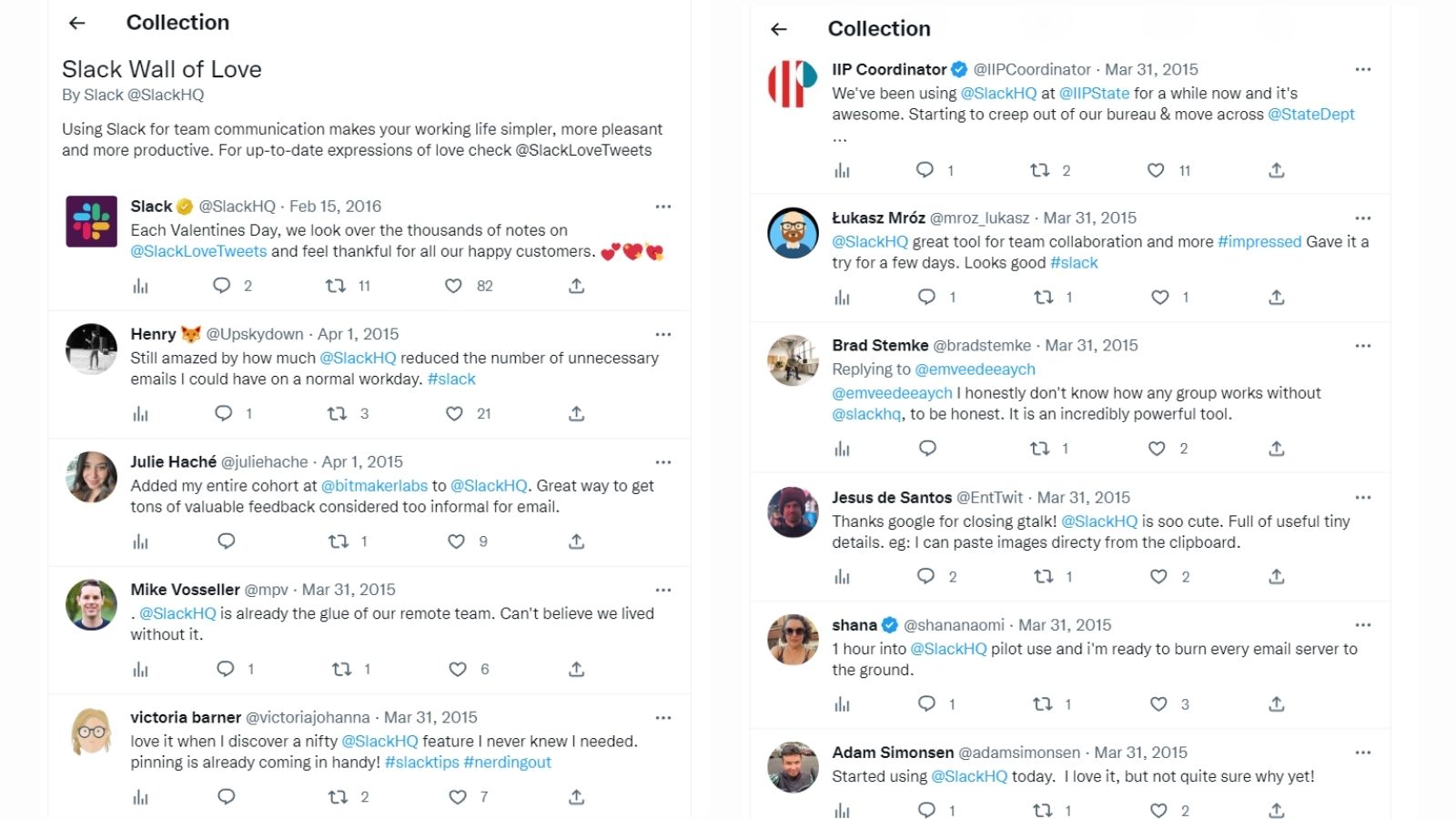 But, why did this strategy work?

So, the first phase of distribution and marketing was done. Slack had to now focus on continuous user acquisition.

Now, Slack's users were not individuals but an entire team. This was both good and bad for Slack.

Good ➝ By converting 1 user, they could reach an entire team of people. Bad ➝ They had to make sure every member of the team likes Slack. One bad review and the entire team could switch.

With the "good" argument, Slack created a viral acquisition loop.

This means that every time Slack adds a member to its network of "users", there is a huge probability that more members will come along, naturally increasing Slack's visibility.

The best part is that on average Slack's users spend ~10 hours a day on the app. Given Slack becomes an integral part of every active user, the word-of-mouth talk about the product is bound to increase exponentially. 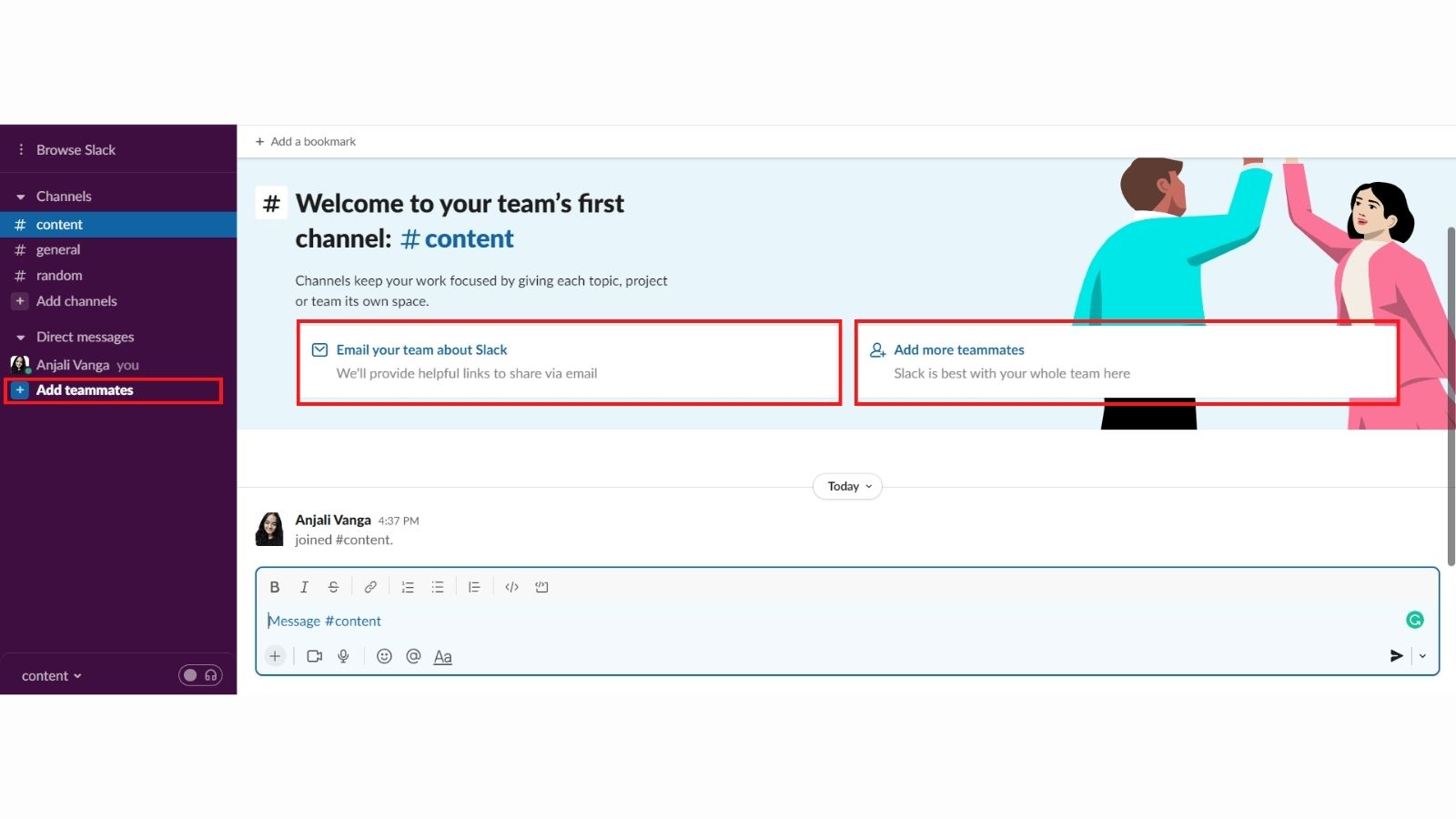 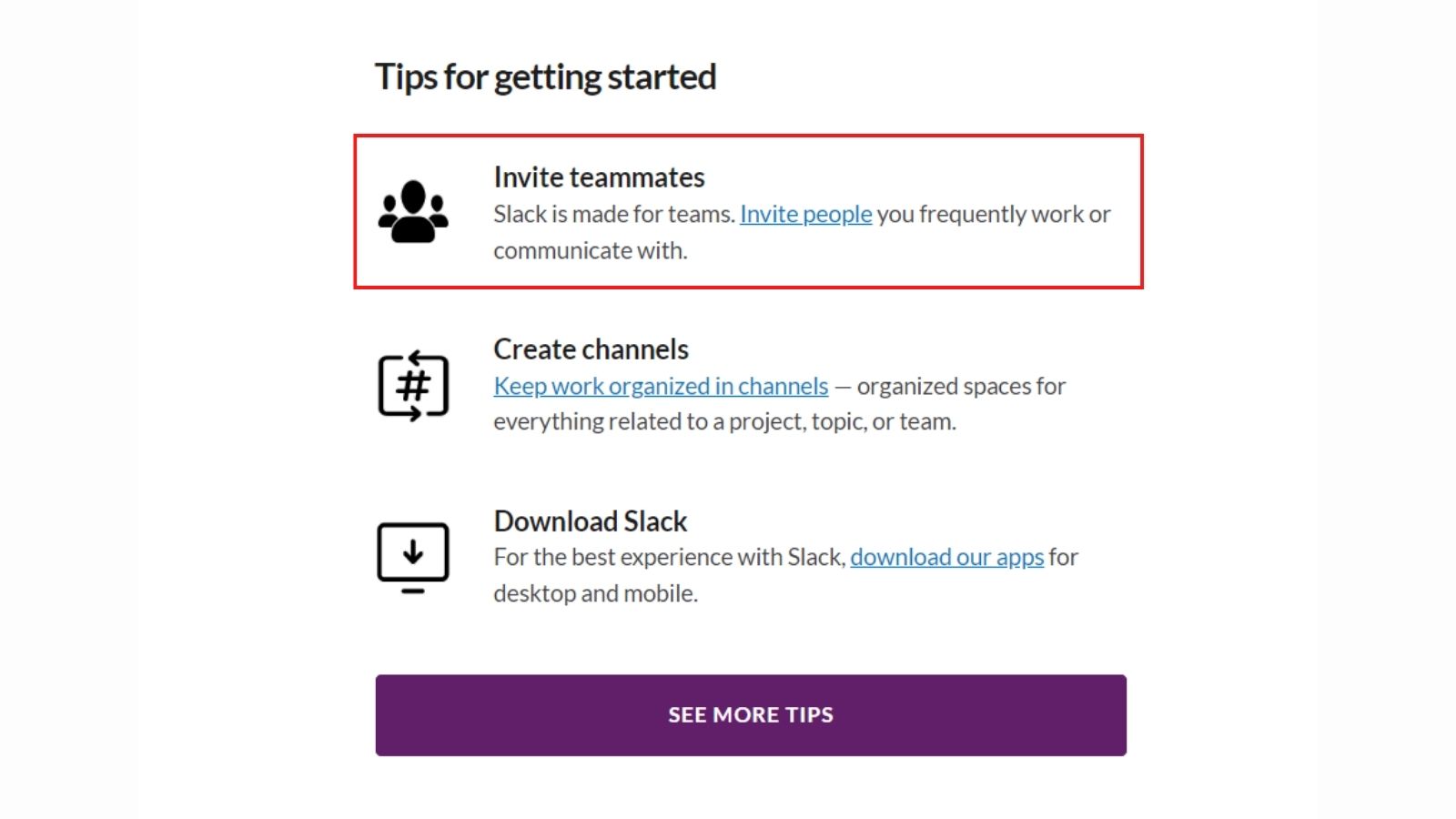 6. From Happy customers to Paying users

In the end, Slack relies completely on keeping its customers happy. They translate their care for customer needs by replying to every feedback message, intricately documenting every little query and incorporating the lessons learned in the product.

The Slack app is designed such that individual users in the team get their own personal views. So, even when they can see the work happening across all channels, they are mainly only concerned with communication that's relevant to them.

But, the story doesn't end here. No doubt Slack adds value, but it also has to create value and for that, they need paying customers.

Now, Slack's main way of achieving this is through their Freemium model:

For example, all the restrictions of the free plan are no longer present - limited message history, 10 app integration, etc.

Apart from the points mentioned above, Slack obviously works on other marketing channels like SEO, paid advertising, influencer marketing, and podcast sponsorships.

But even today, ~95% of their traffic comes directly to their website. That's a huge testament to Slack's incredibly strong word-of-mouth marketing game.[8]

Ultimately, there is definitely a method to Slack's genius:

And, that is how you buildd a $27B company with little to NO marketing :) FirstCry: How a profitable Unicorn wins over Indian parents How SpaceX, Amazon, Zerodha and DoorDash use First Principles Thinking to problem solve?! The Michelin Star Empire: How a tyre company sets the standard for culinary excellence?

FirstCry: How a profitable Unicorn wins over Indian parents

Among the many Unicorns in India over the last 2 year, less than one in five actually made profits from their operations. FirstCry is one of the few Unicron's that turned a profit! Revenue ⇒ INR 1700 Cr Profits ⇒ INR 21 Cr

Back in 2001, FirstCry founder Supam Maheshwari welcomed a baby girl. He couldn't find quality baby products in India, so he'd stock up on toys and clothes from his US & Europe business trips. He realized that there is a huge market for baby and kids products in India that’s currently highly unorganized. So, he decided to start his venture.

Initially, they only focused on selling toys in urban cities, specifically Pune. But, they soon moved to more tier-2 & tier-3 cities. FirstCry's growth can be mainly attributed to its brilliant execution. Let's see some examples!

B) Building a logistics company! Outsourcing the delivery of products was getting expensive. Plus, they didn't have full control over the customer experience i.e. on-time, safe delivery. So, they started their own in-house logistics division in 2012, called XpressBees, which is now a unicorn by itself!

FirstCry’s most impactful marketing strategy is the “Gift Box” program. They partnered with hospitals across India to provide a free gift hamper to parents with newborns (their target audience).

With this program a) Parents are delighted to receive products from popular brands like Pampers, Dove, and Vaseline. b) Plus, these brands get more visibility. So, FirstCry pushes them to sponsor the items in the gift boxes. So, it's a win-win for FirstCry and these brands!

We did some quick math and turns out FirstCry can reach ~24 lakh to 1.2 Cr families through this program. And, if we were to consider that FirstCry bears the whole cost, then the customer acquisition cost comes out to just INR 50 to INR 250!