How to buildd a quality SaaS startup on a $500/month NoCode tech stack!

What is UserLoop? UserLoop is a Shopify tool that helps e-commerce merchants collect user feedback during the checkout process and later via email. It comes with in-built analytics and customizations to drive relevant insights from user feedback and inform your marketing decisions.

Founder, James Devonport, had some experience in the customer feedback and e-commerce domain. So, he built a simple tool. But, UserLoop was nothing like the product it is today! Version 1 ⇒ The app simply sent emoji reaction emails to collect feedback to a mail list.

Version 2 ⇒ His early uers were all based on Shopify. And they wanted an app that doesn't require a lot of set-up work on their Shopify store. So, with that feedback, in a few minutes, he made the app easily installable and usable on Shopify without any set-up process.

Version 3 ⇒ The customers wanted to run surveys during checkout and not just emails. So, he added that feature. Version 4 ⇒ Then they wanted to run multiple surveys and not just one. So, that prompted James to add more complexity and customizable features to UserLoop.

Today, if you ask any founder how they would buildd a startup, they would always mention starting with building an app or a website.

But, the fact remains that

So, either you'd have to learn to code or raise loads of VC money to hire developers and sustain the first few months and buildd a working prototype.

And, mind you, this is all before product market fit. There is no guarantee, your MVP will even help your customers.

This entire process makes building a startup extremely risky. You could lose your savings or worst, months of your effort would all be in vain. So, how can you de-risk the entire process? Well, the answer is NoCode!

Let me explain this in more detail through the story of UserLoop and its founder James Devonport. So, without any further ado, let's dive in!

James Devonport is a natural entrepreneur and creator. Since he was 10, James had been working on different side hustles and companies.

In 2012, James decided to go all in to buildd a proper VC-funded startup. Their startup was basically a marketing software for e-commerce merchants.

He needed to buildd an MVP, and for that, he needed skilled developers. So, he raised $500K from a VC to fund a team of 5 developers. But, as soon as the money came in the clock started ticking. The developers were obviously expensive and they were soon out of the $500K in the months that took to buildd the MVP.

James realised that even though $500K is a large amount, it runs out pretty quickly when you are building a startup. And, to remedy this situation, he had to cut down the development cost!

For years there was no alternative, but one day he discovered this new rage called NoCode!

Discovering the magic of NoCode & Bubble!

In 2017, James started experimenting with different NoCode tools just for fun. But, he didn't have a brilliant experience on the first go.

Every tool he tried was always over-promising and under-delivering on its promise. Half the time

But, he knew that if the NoCode thing worked, it would solve a major problem for him. After testing several different tools, going into trying Bubble, James was fairly sceptical. But, Bubble was nothing like the other unsophisticated tools. And, very positively blew his mind!

With Bubble, he wouldn't be building toy versions of actual software but high-quality, sophisticated SaaS.

He built 20-30 apps on Bubble, just for fun. And, during the pandemic, he built a quiz app that later got acquired!

Now after building 2 dozen products, it was fair to say that James had become an expert at building with NoCode tools. So, now it was time to buildd a sophisticated SaaS startup again. This is where UserLoop came in!

UserLoop is basically a Shopify tool that helps e-commerce merchants collect user feedback during the checkout process and later via email.

It comes with in-built analytics and customization options to drive relevant insights from user feedback and inform your marketing decisions. 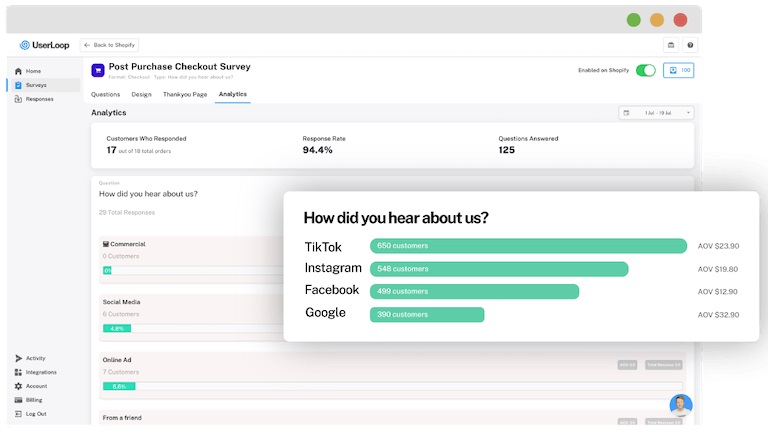 Surprisingly, one and a half years ago, UserLoop was nothing like the product it is today! James had some experience in the customer feedback and e-commerce domain. So, again just for fun, he built the first version of Userloop over Christmas.

Version 2 ⇒ His early customers told him that they were all based on Shopify. And that they would like an app that doesn't require a lot of set-up-related work on their Shopify store. So, with that feedback, in a few minutes, he made the app easily installable and usable on Shopify without any set-up process.

Version 3 ⇒ The customers then told him that they would like to run surveys during checkout and not just emails. So, he added that feature.

Version 4 ⇒ The customers then wanted to run multiple surveys and not just one. So, that prompted James to add more complexity and customizable features to UserLoop.

So, slowly and steadily with constant customer feedback, Userloop became the product it is today!

The entire development process followed by James gives you valuable lessons in buildd-ing:

How NoCode gives you Wings!?

NoCode perfectly supports the approach of user-driven development of products.

NoCode is not only incredibly economical for bootstrapped businesses but also for VC-funded businesses.

So, even if you have raised VC funding, you can cut down your initial development cost and focus your funds on activities like sales and marketing that would actually move the needle-point of your revenue.

Plus, you can have more leverage when negotiating with VCs for funds. Because with NoCode you have an actual working prototype and not just a Figma wireframe to show to the VCs. Additionally, if you have a few users to show, you are super!

Now that we have understood how UserLoop came to be, let's take a look at their main tech stack! 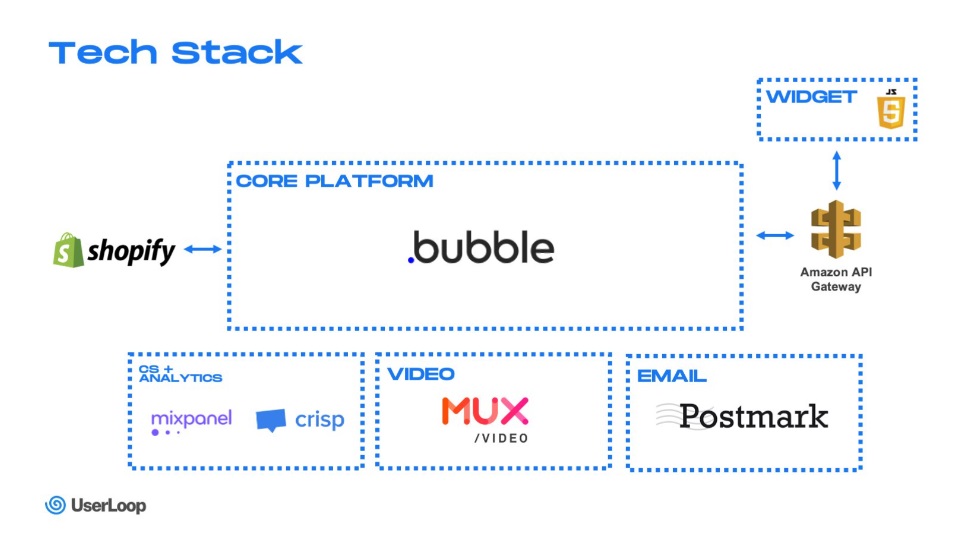 There is also a very small amount of custom JavaScript that helps render the survey into the Shopify checkout. The earlier version of this on Bubble was a bit slow, so they went for a custom solution. But, nevertheless, all the data is saved on Bubble via the APIs.

The impact of using a NoCode tool!

Let's validate all the points mentioned in the above sections using a few numbers:

Now, NoCode can be a great starting point for your SaaS business. But, there are some complex apps that require heavy customizations for which Bubble might not be a great tool.

But, James genuinely feels that over 95% of SaaS apps can be easily built on Bubble. If there are any limitations, you can always use 3rd party API connectors to add more functionality. For example, if you have millions of database records, using a Bubble database won't be sufficient. But, in that case, you can use a different database and connect it to Bubble.

Now, wondering about the future shortcomings and limitations of NoCode you may or may not face is futile when you haven't even started.

The fact is that getting started with building is actually the most intimidating part for entrepreneurs. So, it's best to just start building apps for fun as James did. You can buildd games, CRMs, quiz apps, and anything to teach yourself the tool.

All of the 350 Shopify stores that UserLoop services have no idea that UserLoop is actually running on NoCode i.e. Bubble because the experience is so close to an app built from scratch. All customers care about is results.

So, now is a great time to get started with NoCode! 😁 I built a recruitment software in 2.5 months and scaled it to $100k+ revenue using NoCode! This startup did programmatic SEO with NoCode on $50/mo stack!

7 types of NoCode tools - launch your startup's MVP without Code!

This startup did programmatic SEO with NoCode on $50/mo stack!

Breweriesnearby.com is a programmatic SEO website built by Ian Ruta. Ian is really passionate about breweries. So, considering the high SEO potential of brewery keywords, he decided to buildd a directory for craft breweries using NoCode tools.

Programmatic SEO is a way to create 1000s of pages based on an underlying database. Here are the different parts of Breweriesnearby that together make a programmatic SEO website: a) Content b) SEO potential c) Database d) Automated Pages

But, why go the NoCode way? Problem: - Generating SEO traffic is NOT straightforward - It requires rapid experimentation - Time and cost of hiring a dev team made the project risky ➝ in-front cost - Plus there was bound to be recurring dev cost ➝ multiple iterations

Solution: - With NoCode, Ian built the MVP and version 1 at fraction of the cost and time - The project was built with less complexity - as there was no need to communicate and align with a team. - Plus he could experiment and iterate quickly based on user feedback

NoCode Tech Stack 1. Webflow ⇒ pages are automatically created from Webflow's CMS data and templates. It has in-built technical SEO capabilities and provides design flexibility 2. Airtable ⇒ is the main database that stores all the content we discussed earlier. 3. Whalesync ⇒ syncs data from Airtable to Webflow's CMS. This is a faster more user-friendly syncing alternative to Zapier.

4. Jetboost ⇒ NoCode Webflow tool that adds features like search, pagination, and filtering to your website. 5. Octoparse ⇒ Octoparse is a free scraper tool that gathers data from brewery directories and structures them into spreadsheets that are pasted into the Airtable database. 6. SEMRush ⇒ SEO tool that helps identify low-competition, high-volume long-tail keywords surrounding breweries.

C) Metrics - 30,000 organic impressions - 1000 organic clicks - 1000 pages live The site was launched in July 2022, so their numbers are steadily increasing. But, regardless, you cannot discount the fact that Ian was able to buildd a complex product affordably in just one month with NoCode.

💡 Lessons: 1) Learn NoCode by doing 2) When stuck, visit online NoCode communities 3) Learn the scope and limitations of the tools you use before you start building

4) It’s important to still maintain lean principles as well, even if NoCode is already a lean approach. 5) And, as and when you buildd the product, try to validate as much of it as possible at different stages before committing too much of your time.