Scrum of Scrums: What it is, origins, agenda and all you need to know

What is a Scrum of Scrums? When is it conducted and what is its purpose? Find everything you need to know about it in this blog.

What is Scrum of Scrums?

A Scrum of Scrums, also known as Meta-Scrum, is a scaled agile technique used to connect multiple Scrum teams who work together on a complex solution.

Having a higher number of members in a single team increases the lines of communication. Due to this, smaller Scrum team sizes are recommended. So, when working on complex projects, the large group team is split into smaller Scrum teams. This helps to reduce lines of collaboration and maintain personal collaboration. These teams have their daily standups to discuss the tasks for the day. In these, they choose an 'ambassador' to participate in the Scrum of Scrums. The Scrum of Scrums is hence a meeting of ambassadors from the smaller Scrum teams.

These ambassadors may be a technical contributor, Scrum master, a product owner or a manager. Teams usually alternate their representatives over the course of the project.

In the Scrum of Scrums, a rep from each Scrum team shares major updates on the team's work. The rep talks about the team's progress and challenges faced. This usually happens after the daily standups, so that they convey the latest info.

The meeting is a way to enable teams to have effective cross team collaboration. It promotes transparency and adaptation at scale when working on a complex project. Teams highlight dependencies and tackle integration and conflict points. This technique is the oldest and most commonly used agile scaling framework.

History of Scrum of Scrums

Jeff Sutherland and Ken Schwaber, two of the pioneers of Scrum, first used the Scrum of Scrums method in 1996. It arose from a need they both had, to coordinate eight business units. Each of these had multiple product lines. Due to this, an effective way to bring about sync between the members was needed. To tackle this, the Scrum of Scrums came into being.

Inspired by this instance, Jeff wrote about it publicly for the first time in 1996. The article, 'Agile Can Scale: Inventing and Reinventing SCRUM in Five Companies' brought popularity to the Scrum of Scrums. This method has since been in use all over the world.

The Structure of Scrum of Scrums

The below diagram gives a visual representation of the structure.

Consider that the people working on the project are about 35 in number, split into 5 Scrum teams of 7 members each.

Now, these teams have their daily Scrum meetings/ standups. One member then represents the team in a Scrum of Scrums. This is shown in the top row 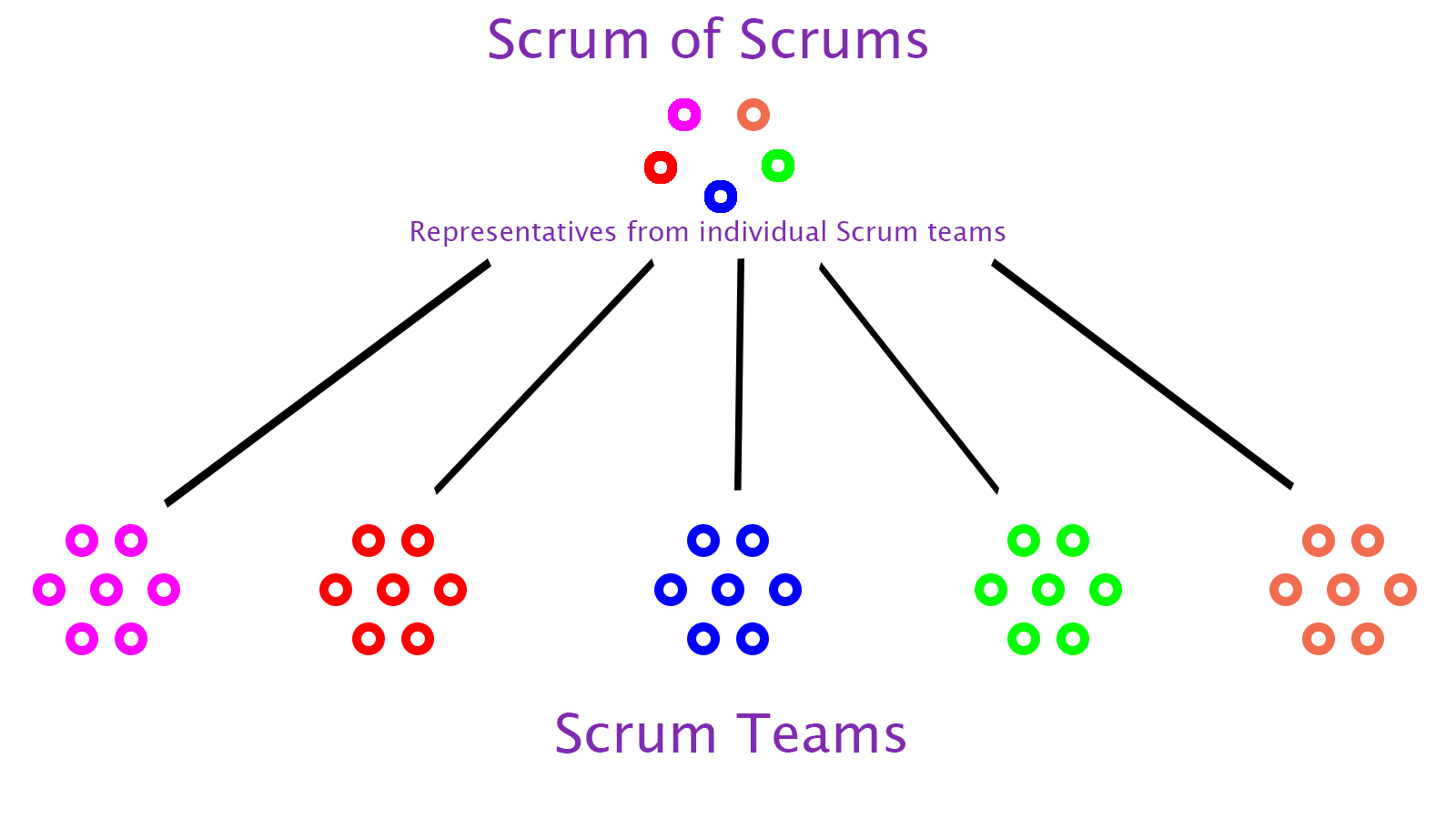 Conduction of Scrum of Scrums

When the Scrum of Scrums takes place, the team reps answer the following questions:

The exact questions could differ a bit, but these sum up the general agenda of the meeting.

As already stated earlier, the team rep or ambassador is chosen by the team. These could be a technical contributor, Scrum master, product owner or manager. The person representing is usually changed every few days or so depending on the team and the stage of the work. Also, more than one person could represent, for example, the Scrum master as well as any developer.

Generally, the Scrum of Scrums is conducted on a daily basis, but this isn't a must. This depends on the project needs. The teams decide the frequency of the Meta-Scrums. For example, it could be daily, or twice a week, or less frequently based on the project.

Purpose of Scrum of Scrums

The purpose of the meeting is to achieve better team collaboration on a complex project. These are some of the things it helps achieve:

Best Practices for conducting a Scrum of Scrums

By now, you'd have understood most things about a Scrum of Scrums and are ready to conduct these in your teams. To help you with conducting these, here are a few points to keep in mind. Media mix modelling is how marketers can use the trove of data they have to drive more conversions. Learn all about it in this article!