How did a baby company like Indigo manage to stay profitable for 10 years? And, even beat the industry giants to acquire its ~60% share & "monopoly" status?

For an industry known for flying people, it's funny how many airline companies have crashed to their death.

Think about the recent fall of Jet Airways, the crushing debt on Air India or even the complete vanishing act Kingfisher pulled years ago!

It's clear that the aviation industry is not for the light-hearted! And, will most likely turn billionaires into millionaires.

So, how then did a baby company like Indigo manage to stay profitable for 10 years straight? And, even beat the industry giants to acquire its ~60% share & "monopoly" status in the Indian aviation market?

Well, I was of course curious about this, so I did a bit of digging! Here is a complete breakdown of Indigo's GENIUS strategy that leaves no stone unturned. Let's go! 🚀

A little bit of history & how Indigo came to be!

The aviation industry is a pre-independence fossil established all the way back in 1938. It was founded by one and only J.R.D Tata. But, after 1947, the airline was renamed from Tata Airlines to Air India!

Since then, the government of India has had a strong hold on this space. That was until 1994 when India repealed all regulations & allowed private players to participate in the market. This deregulation gave birth to giants like Jet Airways & Air Sahara.

Now, in the late 90s and early 2000s flying via air was a costly affair. So, the status quo of the industry favoured the "air travel is a luxury" angle.

That changed when a bunch of low-cost carriers made a debut in the early 2000s, most notably — Indigo!

Interglobe Enterprise head, Rahul Bhatia, & IIT Kanpur grad and aviation industry veteran, Rakesh Gangwal, came together to launch Indigo in 2006. With Rakesh in the US & Rahul in India, the duo essentially built Indigo into an aviation monopoly by sitting 7000 miles apart! 🤯

Now, during the same time as Indigo, another high-profile airline was making its debut. Vijay Mallya's Kingfisher was also launched in 2005 & they were doing very well. In a couple of years, it expanded to become 2nd largest Indian airline after Jet Airways.

But, within a couple of years, these two newcomers went in completely different directions. While Kingfisher nosedived into oblivion, Indigo soared.

To understand how unprecedented Indigo's growth was, we'll first have to look at some numbers.

These numbers are extremely revealing. 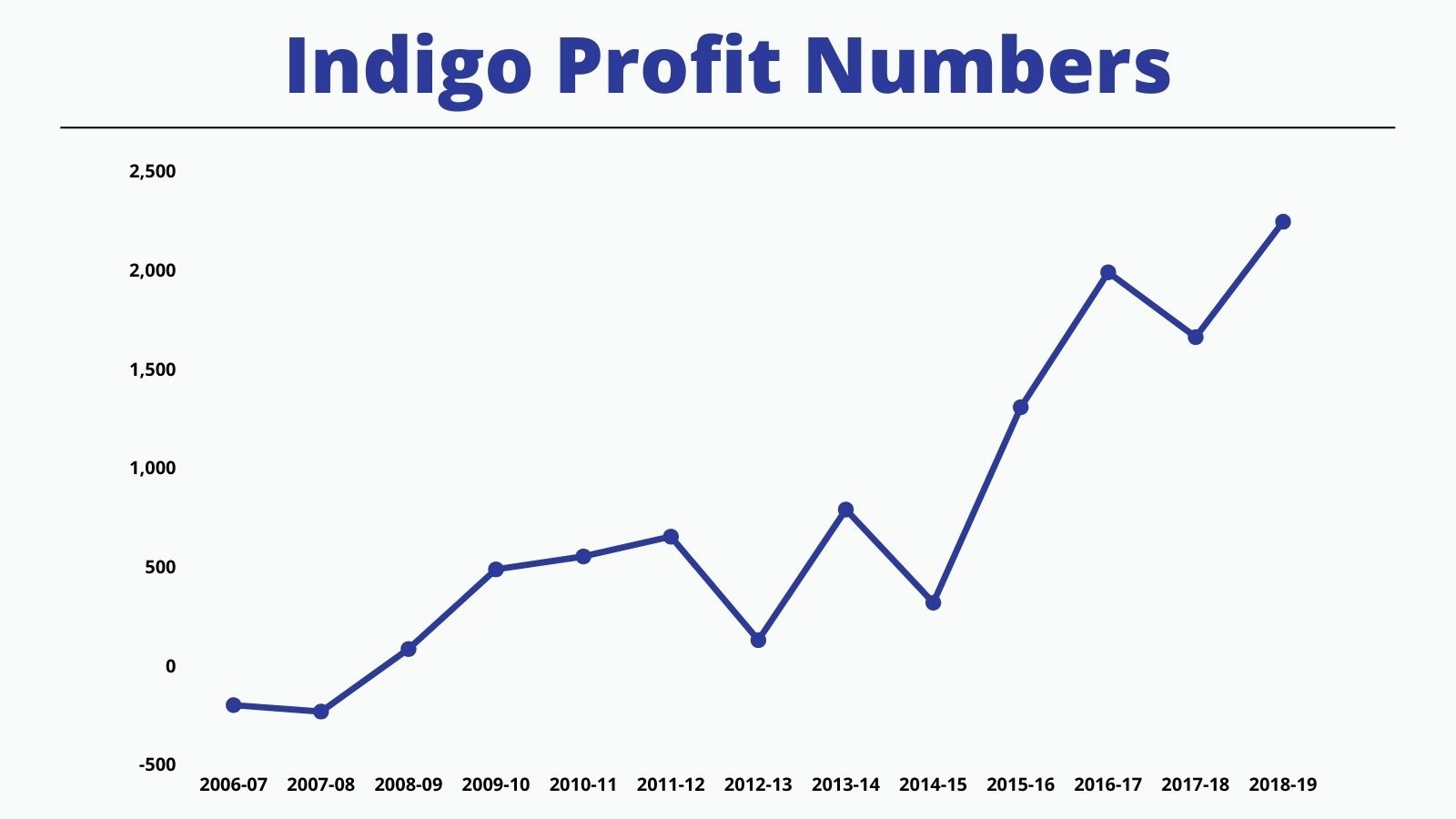 The SECRET weapon to Indigo's success!

Indigo credits its sudden turn to profitability to its commitment to keeping its balance sheet extremely lean.

But, by nature, you have to enter the aviation industry with a truckload of cash. You are not paying $10 dollars for a domain name here, instead, you are literally buying a plane and filling it with super expensive fuel!

Indigo's GENIUS lies in how cleverly it has managed this entry-level problem using its "Sale and Lease Back" model. Let's learn more about it!

Sale and Lease Back model 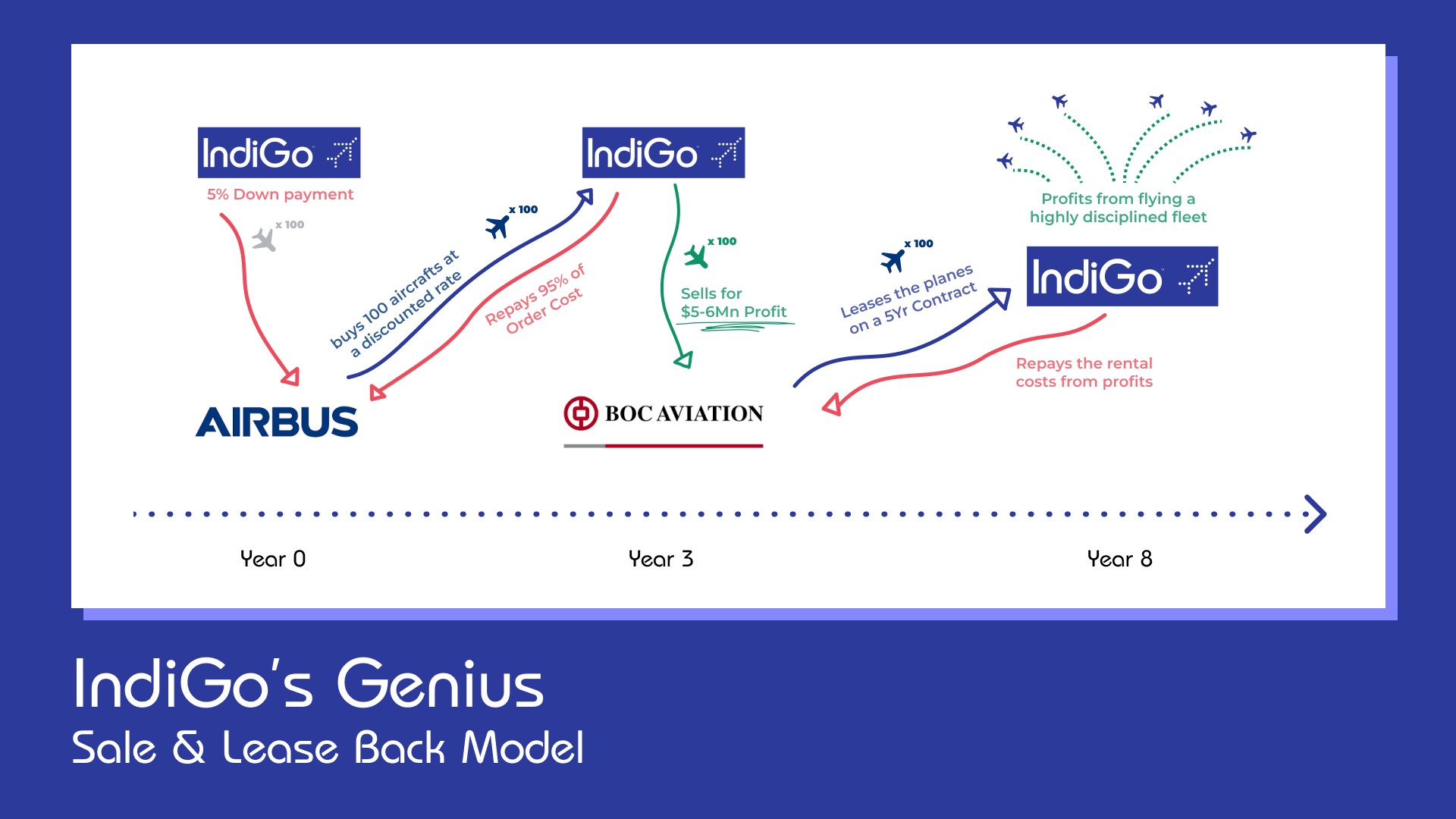 In 2005, prior to its launch, Indigo decided to order a total of 100 aircraft from Airbus! Why? Well, bulk orders bring discounts.

With the revenue made by operations, Indigo then pays

The goal is to not make profits from the Sale and Leaseback model, although that's an upside.

But, this model helps keep Indigo's balance sheet super light & cash flowing. Indigo swears by this model, and over 80% of Indigo's fleet is leased compared to the industry average of 40-50%!

Now, the sale and leaseback model is not always ideal. You see, with newer versions of planes, like the new A320 NEO, the lease rentals also climb up, effectively increasing the periodic fixed cost. So, many airlines prefer owning part of their fleet.

Indigo also at one point backtracked from this model. But, with smaller margins, it eventually went back to the model again.

How does its super-efficient operation keep it flying?

Although the sale and lease back model makes for a great foundation, there is more to Indigo's profitability story.

This is a typical story of why "Go Big or Go Home" is a huge myth!

Unlike KingFisher, Indigo expanded slowly depending on its capacity. And, with high operation efficiency & no loose ends, they became the largest airline in India in 2012!

On the other hand, KingFisher's massive spending & high losses made it impossible for them to continue operations.

10 years of profitability and road ahead

If you look at Indigo's journey, you'd wonder how a company entering such a crowded space could beat industry giants & capture ~60% of the market share in just 15 years.

Well, Indigo did enter a crowded space, but unlike other airlines, it got one thing correct — India is a price-sensitive market. So, even if Jet Airways & Kingfisher offer you comfy seats & good food, an average Indian will still choose the cheaper ticket!

So, Indigo basically entered a crowded space, understood what other players were doing wrong, kept their operations super lean & beat them at their own game!

Lesson ➝ Discovering competitors for your startup idea is a validation of the market, NOT a source of sadness.

Now, after an awesome 10-year run, Indigo started making losses in 2019. And, with the pandemic & its expansion strategy, the losses increased. But, in Q3 of FY21, Indigo made a comeback with a small number of profits.

That didn't last, with rising fuel prices, a comeback from Air India (backed by Tata) & Jet Airways & increasing costs, the road to profitability will be difficult.

But, Indigo insists it will make it & we are not going to be the ones to doubt it. So, it'll be interesting to see how the AIR GAMES continue with the new-old players & if Indigo can keep its throne! We at buildd will continue to cover this, so stay tuned 😉